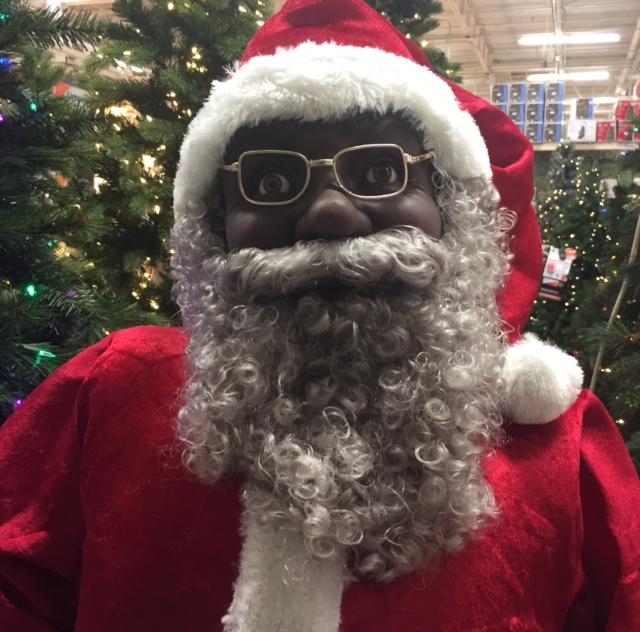 Home Accents has a really cool African American Santa Claus prop for 2017. The 6′ lifesize black Santa looks pretty realistic. Jolly Old Saint Nick sings and dances when he is activated. Santa will sing “Holly Jolly Christmas and Winter Wonderland” as his arms sway from side to side and his mouth moves under his beard. The prop is available at Home Depot.

Here’s a video of the Animated Home Accents Santa in action.

There have been other black Santa props put out by other manufacturers like Gemmy who are very popular on Amazon.com. They retail for around $100.

I really like this prop and think it would make a great addition to my collection. I have a ton of Halloween props but none for Christmas. Having Santa singing and dancing by the tree on Christmas would be a lot of fun for everyone in the family, not just the children.

The Home Accents Santa retails for $99 at Home Depot and also comes in white in addition to the African American version. Both props sing the same songs and dance the same way. The only difference is the color of their “skin”. The prop is 6 feet tall and 27 inches wide. Home Accents recommends that the prop be used indoors only, even though I think it might be cool to have it on the roof when your kids get home on Christmas Eve. I’d really love to see them come out with a Mrs. Clause prop to go with her hubby. Unfortunately we will have to wait until next year to see if Home Accents makes one.

Last year Home Depot carried a similar Santa prop but it sold for $200. I went back after Christmas last year to see if I could find him marked down but, alas they were sold out and I missed out. This year by providing a cheaper prop I think I will go ahead and pull the trigger and bring Santa home this year. I have a spot by the chimney picked out for him. Since the Santa prop is so affordable I imagine Home Depot will run out shortly after Thanksgiving.