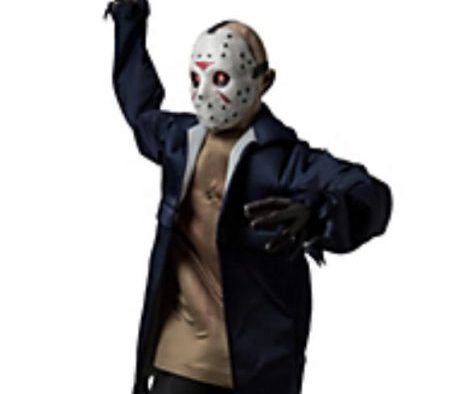 Just when you think Spirit Halloween has all the great Halloween props Party City had to jump in with their brand new Jason Voorhees animated prop. Everyone loves Friday the 13th and now you can have Jason make an appearance at your Halloween party this year.

Party City unveiled the prop on, well of course, yesterday, Friday the 13th. Jason stands 6.5 feet tall and is officially licensed so you will be getting an authentic Jason Voorhees animatronic. Several years ago Gemmy produced a Jason Voorhees animated prop that was really popular but now as time has gone by it’s hard to find one that still works. I don’t think that the Party City version is as nice as the one Gemmy did a while back but it’s still pretty cool.

The one thing I hate about Halloween props that a lot of companies tend to do is use red glowing eyes. I think this kills the prop and makes it look hokey and very unrealistic. Unfortunately Party City’s Jason Voorhees has the dam red glowing eyes. In the past I’ve snipped the wires on props that had the glowing eyes but that’s really up to you. Just because I think the red eyes are silly doesn’t mean someone else will think they are great.

According to Party City’s website the animated Jason is not yet available to purchase online. I dug a little deeper and found that it’s not even available to buy in their stores yet either. I imagine as we get closer to Halloween we will be able to get him in a Party City location.

At $179.99 the prop is reasonable priced but I do want to see him up close to see if he is lifelike and realistic. If I do decide to buy the Jason animatronic the first thing I’m going to do is get some dirt and rub it all over him to make him look like he’s actually been in the woods killing teenagers.

Keep checking back with us. It seems like more and more Halloween props are being released by the day.