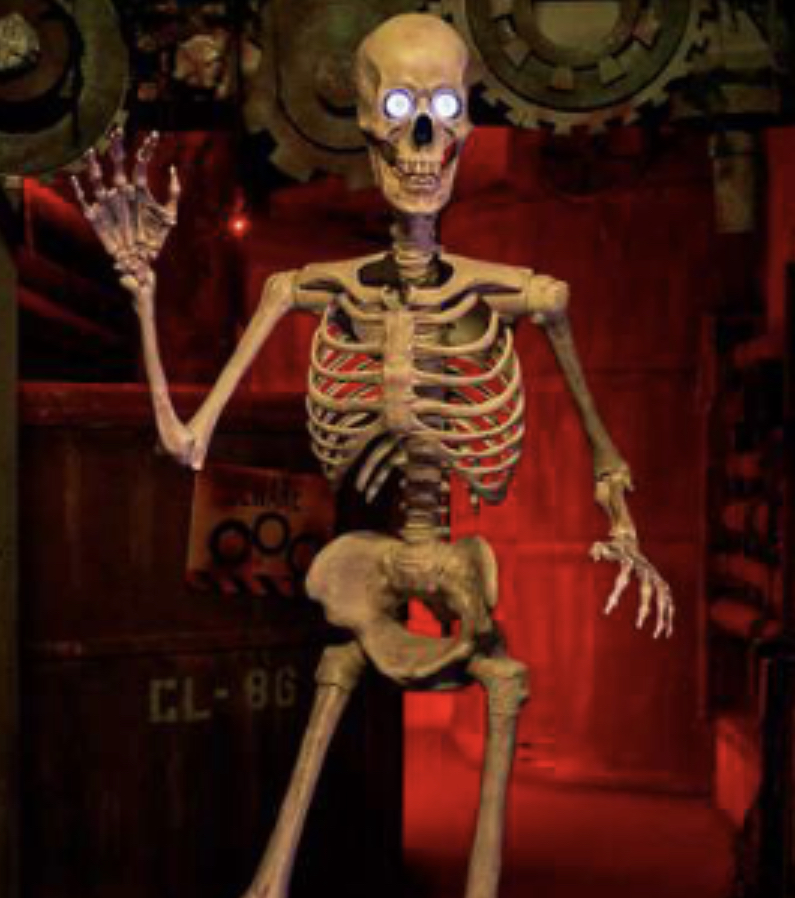 What’s old is new again! Last year Home Depot took the world by storm with their 12’ animatronic Skelton. It seemed like everyone wanted one, yet no one had them. For as quickly as Home Depot put them on the shelf, they flew into shopper’s carts even faster. Spirit Halloween is trying to piggyback off of the oversized skeleton with a new offering, an animated skeleton that is twice the size.

Watch out when the sun dips below the horizon and the dark blanket of night lays across your sleepily little town because Grim and his tortured, undead brethren rise to stalk the lives of the living. Cursed to walk the night for eternity, reaping misfortune and ghastly dread to anyone unlucky enough to cross their path. Don’t be fooled by their wicked sense of humor, or else while you are laughing, you might find that your funny bone, along with the rest of your skeleton, ends up part of their army – FOREVER!

When activated by a sensor or step pad, Grim’e LCD eyes light up as he begins to move his head up and down and side to side. His arms also begin to move as he begins to speak and say one of the following phrases:

“Your host is not here right now. They’re busy burying something in the backyard. But we’ll have loads of fun while they are gone. Hahahah! The night is young, and I’m ready to party! Are you?”

“You best be careful where you tread on this dark night, you don’t know WHO you will run into. Creatures and creepy-crawlies lurk out from every shadow. Why, I was just hiding in your closet with the other skeletons. Perhaps we let them ALL out for some fun Ha ha ha ha!”

“Ahh you look like death warmed over my friend. This is good! Soon there will be enough of us…and we will terrorize the living until we own this night! Are you with me? Tonight is ours!”

At $279.99 Grim is reasonably priced considering how much he moves. And since his mouth moved when he talks, he gets a thumbs up from me. Having a prop whose mouth doesn’t move when he talks is a downer for me, so it’s good to see Spirit Halloween paying attention to detail with the skeleton prop.

Keep checking back. New stuff is trickling out daily! Halloween is right around the corner.