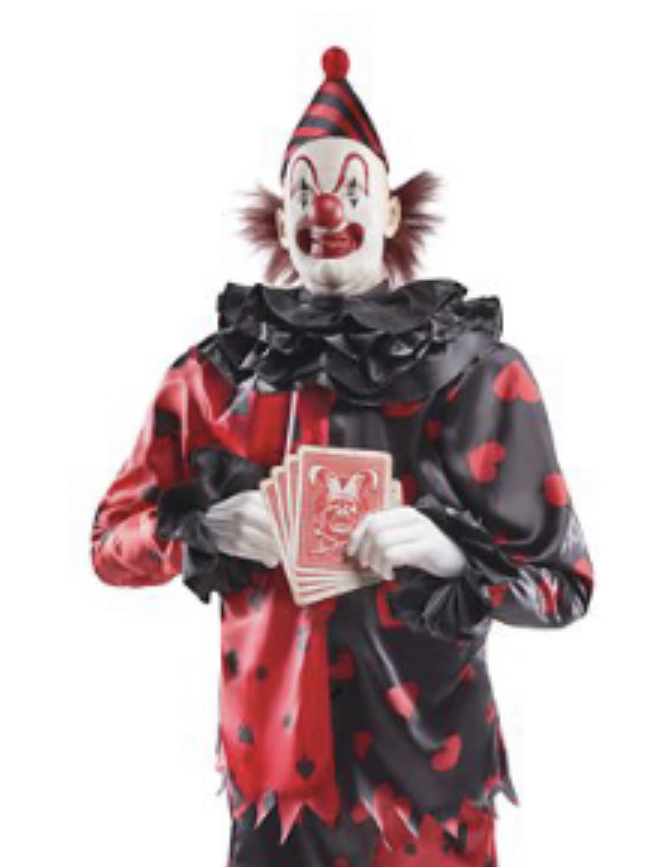 Spirit Halloween has finally released some of their new Halloween props for 2021. This morning we got the first glimpse of what we can expect in stores (and my backyard) this year.

First up is Henry Hustle. Henry is quite the character. You could play along with his card tricks, but it might cost you your life!

Pick a card, any card! Henry guarantees you will end up with the dead man’s hand. He wasn’t always so cruel, but when the circus left town with his money & bag of tricks, he snapped. It didn’t help that the ringmaster ran off with his Mrs. Hustle! Now the deck is stacked against anyone unlucky enough to play a hand with him because while you are following the queen, his daughter Harriet is busy robbing you blind… or worse!

When activated Henry’s eyes light up and he begins to perform a card trick until his head pops up out of his shirt! Henry also says one of several different phrases.

“Time for a trick” (as hand pops out) “Remember this card!” (Hand retracts) “It’ll be the last thing (hand pops out and evil head pops up) (Booming loud evil voice) “you’ll ever see!”

“Step right up and pick a card!” (as hand pops out) “Hmm it seems you’ve picked…” (Hand retracts) (hand pops out and evil head pops up) (Booming loud evil voice) …” The Card of Death!”

“Want to play a hand?” (as hand pops out) “Stakes are high and you may lose.” (Hand retracts) (hand pops out and creepy head pops up) (Booming loud evil voice)” YOUR LIFE!”

At $229.99 Henry Hustle is reasonably priced. He’s not the most expensive prop, but he’s also not the cheapest either. If you are a fan of clowns like me, Henry is probably going to be on your radar. I think it’s actually a neat idea. Clowns have been hot since Pennywise caught fire at the box office a few year ago. I like adding in cars tricks and a pop up head.

If you decide to pull the trigger on Henry just remember that he won’t shop until mid-September. But don’t fret! He will be on your doorstep in plenty of time got Halloween!

Please continue to check back. Lots of cool stuff coming your way!