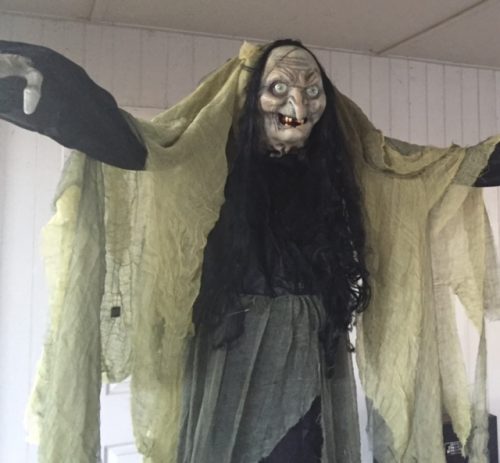 Earlier this month Spirit Halloween had a really good sale on animatronics to clear out inventory before the new 2017 props started rolling into their warehouse. I took advantage of their sale and picked up a Towering Witch for only $125. Last year the prop was $249 so getting this really large prop was somewhat of a steal that you would normally find only on November 1, the day after Halloween.

Here is the prop once I finally got it assembled.

The Towering Witch has three sayings which she says with a slight Cajun accent.

Who is be disturbing my slumber? It’s just a lost juicy lamb ready for slaughter.

You best be careful ’round these parts. They be lots of critters wanting to get there teeth into something as tasty as you.

Come on over here my little nibblet and I’ll take real good care of ya! I’ll be sure you won’t have nothing to worry ’bout ever again!

I’m pretty content with the Towering Witch for the price I paid. I like big animatronics that immediately draw your attention when you see it. This prop does just that. Her accent is pretty unique too and the Cajun drawl adds a little to the character of the prop.

1. The arms don’t move. She just sways from side to side from her hips and the arms don’t go up and down, only side to side with the prop as it moves. I think once it’s dark and I have a little light on her it won’t matter and she will be a lot more spooky once it gets dark. I do wish she had more movement to appear more realistic.

2. Her voice is just like the Swamp Hag. I understand that it’s probably the same voice actor doing both voices but I wish they could’ve made it a little different. Since I have both props I’m going to have to make sure I don’t put them close to each other because the voices are the same. I had planned to put all the witches in one part of the yard this year but I may have to move the Swamp Hag to a different location. It is a little petty but it is something I think the manufacturer should think about going forward.

All in all, I’m pretty pleased with the Towering Witch. Anytime you can snag a big prop for halfprice you really can’t complain. I’ve been looking at the 7′ Evil Clown and hope to add him to my collection but I don’t think he’s going to reduced anytime soon.