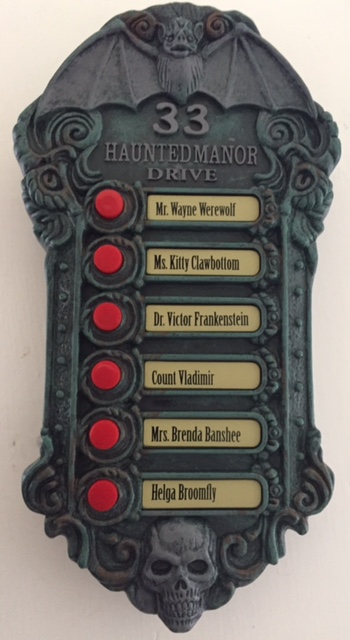 This morning I was walking through Spirit Halloween with my wife and she noticed a Haunted Manor Greeter that she thought would go great with our setup for the Halloween party we do every year. She thought it would make a great addition to the front door and would be something fun our guests could do when they arrive. After taking a look at it I decided to give in and bring it home along with some other things I couldn’t live without.

It’s like the doorbells you see in apartment buildings where you can call up to someone before they buzz you in. The tenants of 33 Haunted Manor Drive are Mr. Wayne Werewolf, Ms. Kitty Clawbottom, Dr. Victor Frankenstein, Count Vladimir, Mrs. Brenda Banshee and Helga Broomfly. Each character makes a noise that corresponds with their names. Mr. Wayne Werewolf howls when you push his button. Ms. Kitty Clawbottom sounds like an angry cat. Dr. Victor Frankenstein makes a buzzing sound. Count Vladimir is the only character who talks to you when you press his button. Vladimir says, “Good Evening ha ha”, after you hear an organ play. Mrs. Brenda Banshee makes a strange squealing sound and Helga Broomfly sounds like a witch brewing something as she cackles. Also, when you press the button beside each characters name a light will appear behind their names.

The Haunted Manor Greeter runs on three AAA batteries which are included. It’s fairly small, less than a foot long and about four inches wide.

This prop isn’t for everyone but it is something fun you can put by your front door for a Halloween party or on Halloween night for trick or treaters to play with while they wait for you to bring them some candy.