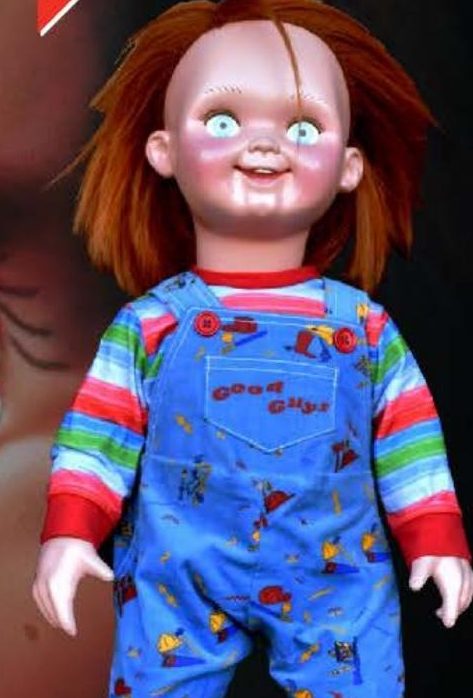 Trick or Treat Studios really made a splash at HauntCon last week when they rolled out their 2018 Halloween Catalog. If you haven’t checked it out yet there is a ton of great new stuff coming your way in 2018. One of the things that really jumped out to me was the Good Guy Chucky doll from the movie “Child’ Play”. We’ve seen a lot of the Chucky dolls from some of the sequels by Neca and Mezco but this is the first time we’ve seen a Good Guys Chucky that was built to scale from Trick or Treat Studios.

The guys at Trick or Treat Studios had a little fun with Chucky and showed him off on their Facebook page on their way to New Orleans for HauntCon. It looks like Chucky was hungry after a long flight to “The Big Easy”. I wonder what he ordered for lunch?

The Good Guys Chucky prop won’t be available until later this year. Trick or Treat Studios announced on their website that more information about the prop as well as preorders will be available in March. Typically props are introduced in the spring and summer and made available for pre-order around that time. New Halloween props usually being shipping in late August of early September so they will arrive in time for Halloween.

The price point isn’t known just yet for the Good Guys Chucky. Spirit Halloween sold a 24 inch talking Chucky doll for $69.99 last year. However, if you compare it to some of the other props from scary movies from the 1980s on Trick or Treat Studios’ website it looks like it could cost a little more. They offer a lifesize Gizmo, from the Gremlins for $69.99 but they also offer a Spike prop as well for $199.99. We will get a better idea of the cost and other specs when the manufacturer releases the information in March.

But from what I’ve seen coming out of HauntCon the Good Guys Chucky prop is pretty spectacular and anyone who grew up watching the Child’s Play movies will have to have one in time for Halloween 2018.