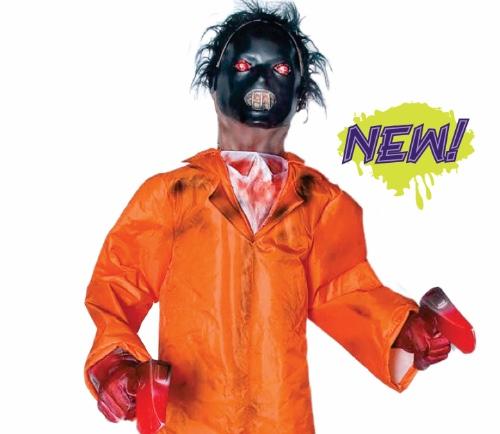 Can you still hear them screaming Clarice? If you loved “The Silence of the Lambs” you are going to be pretty pleased with the new Jumpsuit Psycho animated prop from Morbid Enterprises this year. The Jumpsuit Psycho may not be Hannibal Lecter but he is very similar and comes equipped with the same creepy face mask that keeps him from biting your face.

Here’s a video of the creepy inmate from HauntCon last month in New Orleans. Check it out.

As you can see the Jumpsuit Psycho is a pretty cool lifesize animated prop that would look great at your Halloween party over in the corner of your cold, dark garage. Unfortunately the Jumpsuit Psycho doesn’t seem to do much except have his eyes light up when activated. He does have a hatchet in each hand and is wearing a dirty orange prisoner jumpsuit. According to the Morbid Enterprises 2018 catalog the prop comes with audio and runs on three batteries.

When it comes to animated Halloween props we don’t see a lot of prisoners or inmates. Every Spirit Halloween or Halloween Express has several clowns, witches and zombies to choose from, but prisoners are pretty rare. Usually when we find an inmate prop they tend to be a zombie.

It’s not known exactly how much the Jumpsuit Psycho will cost at retail. From what I’ve gathered I believe he will be in the $99 to $149 range but that is pure speculation. It also can vary from different retailers because each have different margins they operate on. The prop doesn’t do a lot so I don’t see how someone could charge $200 for it.

The Jumpsuit Psycho isn’t the wildest Halloween prop we’ve seen so far for 2018 but due to the scarcity of inmate or prisoner props I will consider adding him to my collection if the price is right.