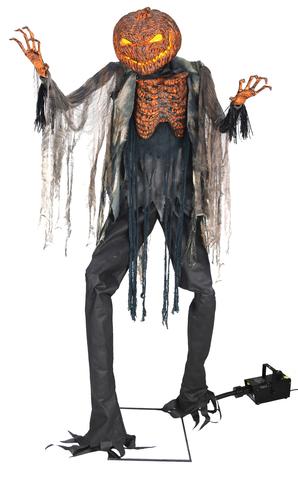 Morris Costumes is on a roll so far in 2017. With several new animated props this year like the Stew Brewing Witch and the Towering Boogeyman we are starting to see some really cool animatronics that will be in every Spirit Halloween and Halloween Express this Fall. Today Morris Costumes introduced the Scorched Scarecrow on their official Youtube page.

Like the Towering Boogeyman the Scorched Scarecrow is also 7′ tall and another large prop that will get the attention of everyone at your Halloween party this October. With a flickering jack-o-lantern and chest piece the Scarecrow looks like he is burned. The huge animatronic comes with or without a fog machine. You don’t have to have a fog machine but he definitely is much cooler with smoke and fog coming out of him.

The Scarecrow has three creepy phrases he will say when your guests get close to him (within 6.5 feet according to the manufacturer).

Like most Morris Costume Animated props the Scarecrow is for sale at Halloween Express for 249.95. However, the prop is out of stock and won’t likely be available until later this summer. I did find the Scorched Scarecrow on eBay for the same price but like Halloween Express he’s not available yet. The prop for sale on eBay is only available for pre-order. The Scarecrow is expected to ship sometime in July, August or September.

I’m not completely sold on this prop. I think he’s pretty cool and very creepy but he reminds me of the Great Pumpkin from the Charlie Brown cartoons. If I can find a Scorched Scarecrow after Halloween for half off I may bring him home but I am having a hard time justifying spending $250 on a prop when I already have my eye on the Stew Brewing Witch and the 7′ Evil Clown that are also new this year.