Where to find an It Pennywise Animated Prop for Halloween 2017

It is the breakout movie hit of the fall and everyone will want to have Pennywise the Dancing Clown at their Halloween party this year. Lucky for you Pennywise will be available to make an appearance if you know where to look and have the means to make him appear for your friends and family.

A few years ago a 1990 Pennywise animated prop was put out by Morbid and it’s still available on Amazon.com if you are interested in going old school with It this Halloween. It’s retro and assembly is required. Red balloons can be purchased separately and placed on sewer grates in your neighborhood to freak everyone out.

The 1990 Pennywise prop based on Tim Curry has several sayings he repeats when activated. You will hear creepy clown music followed by It talking to The Loser Club in the original mini-series.

“Excuse Me Sir, Do you have Prince Albert in a can? You do?! Well, you better let the poor guy out! Ha ha ha ha ha!”﻿

“You all taste so much better when you are afraid.”

“I am every nightmare you ever had. I am your worst dream come true. I am everything that you were ever afraid of”.

If you aren’t interested in the older version of Pennywise you could make your own. I’ve bought cheap props over the years after Halloween just so I could make them into something else. The frame and an imagination is all you really need. If you can take the frame from an older prop and build Pennywise around it that might be the best option this year until they make an official 2017 version. The mask, costume and shoes are available on Amazon.com The only mask I’ve found online so far that actually looks like the 2017 Pennywise based Bill Skarsgård is from Rubies.

The shoes for the new Pennywise are available also on Amazon.com and look a lot like the ones you see him wear in the new film as he terrorizes the kids all over .

The Pennywise costume is available as well on Amazon. There are costumes made for men and women. They each run about $150 but look to be pretty authentic.

Another option is the Halloween Haunters Giant 7 Foot Animated Standing Scary Circus Clown Prop. The clown isn’t exactly Pennywise but the mouth looks a lot like him. If you want the scary jagged teeth like Pennywise has for one of your props, this guy is the one for you.

Until Spirit Halloween or Halloween Express put out an official Pennywise the Dancing Clown prop you will either have to pick up the 1990 version or make your own from the costume, mask and shoes that are avilable online. I imagine we will see a animatronic Pennywise coming out for Halloween 2018 and I’m surprised that New Line Cinema didn’t have the foresight to sell their license to Morbid or another top animated Halloween prop manufacturer since the movie is out now. The only downside for official props featuring movie characters is they usually sell for $200-250. The Jack Skellington prop from The Nightmare Before Christmas that Spirit released this year retails for $249.99. To make the prop the manufacturer has to pay a license fee to whoever holds the rights for Pennywise. Since New Line is the rights holder they can demand a premium for the use of Pennywise’s likeness which causes the price to go up and cost more than a tradition animated Halloween prop that sells for $100-150.

It is the hit movie for Halloween. Get creative and incorporate Pennywise into your Halloween party. Your friends will be impressed if and when you do.

Lil Zappy Is New From Spirit Halloween In 2017 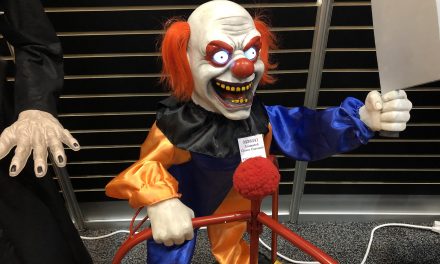 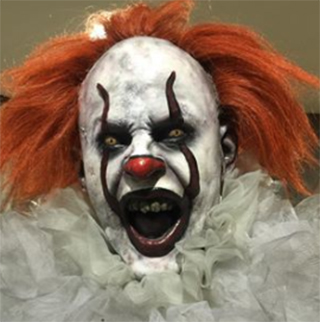