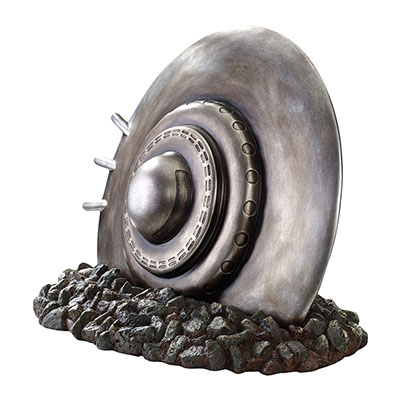 Alien themed haunts like Area 51 have become very popular for Halloween parties and backyard haunted houses in recent years. Some people don’t go with clowns, vampires, zombies or werewolves and stick to UFOs and extraterrestrials. If you are one of those people I think I found something for you. Design Toscano has a really cool Crash Landing Flying Saucer Alien Spacecraft Statue that looks so realistic I had to do a double take when I first saw it. I thought it was out of a movie when I was looking for Halloween props earlier today.

The UFO is almost two feet tall and two and a half foot long. It’s a pretty big prop and weighs 40 pounds so you may need some help getting in the back of the truck and unloading it if you buy it at a big box retail location. Lowes is carrying the prop online and has the option of shipping to the store. It’s not clear if they will actually have it in stock in the store for Halloween or not. The prop is available on Amazon.com as well as DesignToscano.com throughout the year and not just during the fall when people are looking for something cool to add to the yard for Halloween.

This prop would especially cool if you had some green lights around it as well as a fog machine behind it giving off the impression it had recently crashed. Picking up some caution tape to wrap around the UFC also might be a good idea if you want your friends to think they aren’t supposed to be around the crash site.

Design Toscano has built their reputation on attention to detail and you can see the Crash Landing Flying Saucer Statue is no exception.

The UFC prop isn’t just for Halloween and could be kept up year ’round if you had a great place to put it somewhere in the yard.