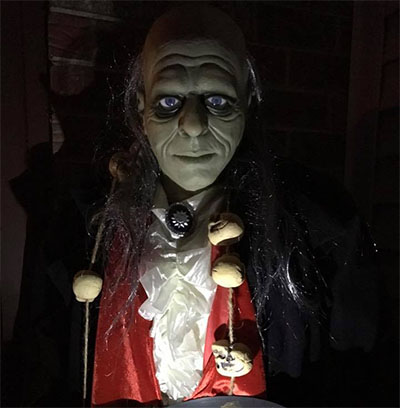 For me this is where it all started. In 2007 on the day after Halloween I was walking through Kroger and saw a box containing a creepy butler marked down to $25. The store was eager to unload their leftover Halloween merchandise and had marked everything down to 75% off to make room for their Christmas stuff. The Butler had originally been priced at $200 so when I noticed it was only $25 I put it in my cart and brought it home.

Once I unboxed the prop I fell in love with him instantly and didn’t put him into storage for 11 months, I put the Butler up in my man cave and left him up year ’round. My friends and family always commented on how cool and realistic he was. Sometimes they’d get freaked out and scream but all in all, the butler who I named Edward became part of the family.

I recently learned that the Edwardian Butler I have is a rare variation since he has gray hair and a red vest. I’ve had offers to sell him but really have no interest. I’ve noticed on eBay that the same variation of the Edwardian Butler sells for $500 to $600 due to it’s lack of availability. The prop was made from 2006 to 2007 and is a collector’s item to Halloween fans all over the world. Nowadays you can find all kinds of Halloween props online but you don’t find as many that have the attention to detail and do all the things Edward can do.

Here is the commercial for the Butler when it first came out over ten years ago.

Edward has several different things he will say to entertain you and your guest every Halloween.

“Thank you for joining us this evening. I hope I may be of some service.”

“Good Evening, the Master’s been expecting you..”

“So glad you could make it!”

“Good Evening, Wonderful to see you here this evening”

“Ahh… another guest! So good of you to come!”

What really makes Edward cool is that his eyes move from side to side and when he breathes his chest expands. When the prop breathes he makes a very loud breathing noise that is quite creepy. He also holds a tray in his hands that can be used for holding candy for trick or treaters to grab when they come to your door.

When I put Edward up for Halloween I put him outside the door and put a light on him that shines up into his face to accent his creepy features. This way every guest or trick or treater can see Edward up close and personal and at his creepiest.

The Butler can be put up for storage just by pressing down on his shoulders. He sinks into his torso and loses two feet of his height so he can be put away until next year if you wanted to put him in the closet until next Halloween.

I highly recommend the Edwardian Butler. He was my first prop and won’t be the last. If you can find him at a reasonable price you should jump on it and bring him home to entertain your trick or treaters or guests at your Halloween party each year.