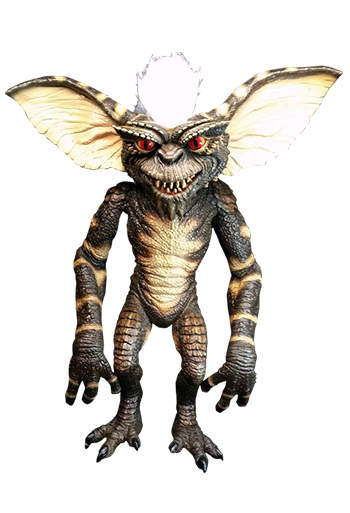 UPDATE: The Gremlins props are finally here and available at Amazon.com

Everybody loves Gremlins. Since the 80s Gremlins have been a big part of pop culture and now they can be part of your Halloween this year. Trick or Treat Studios has unveiled two new evil Gremlins puppet props. One of the props is Stripe, the leader of the Gremlins and the other is a regular evil Gremlin. Both are very realistic and stand 28 inches.

According to their site Stripe was designed by Russ Lukich who has worked on Hollywood blockbusters like Pacific Rim and Jurassic Park 3. You can tell a lot of time was spent by Russ to get all of the details from the iconic Stripe just right for his 2017 re-introduction.

Unfortunately the Gremlins aren’t animatronic but they can be controlled by your hands through a hole in the back to make his head and mouth move. I’m sure it’s possible to rig up something to make his hands move via a windshield wiper motor that you can purchase online. You are only as limited as your imagination when it comes to really cool props like these. Windshield wiper motors can be found on ebay for $30 or so.

Last year Trick or Treat Studios rolled out a Gremlins Mogwai Gizmo puppet and this year they have upped themselves by not only introducing the evil Gremlim puppets but that also have a Mogwai Stripe puppet as well.

The Mogwai Gizmo and Stripe puppets are available now but the new props like evil Gremlin Stripe will not ship until August at the earliest according to the site. With the talk of a potential Gremlins reboot coming in the next few years these puppets could become collector items one day. Until then they will make a great addition to your Halloween decorations and/or party later this year. Whatever you do, don’t get them wet and never feed them after midnight.