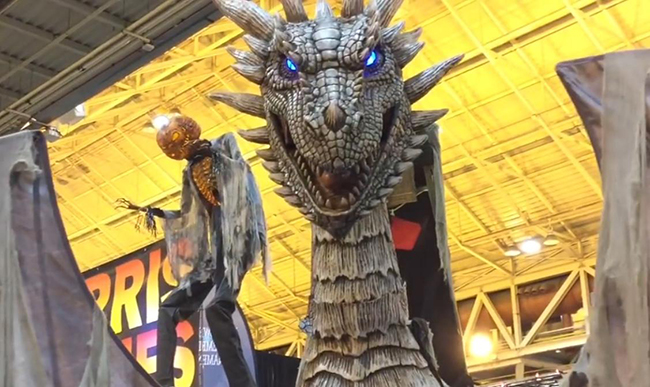 HauntCon 2018 has come and gone but we are starting to see what will be popular next Halloween. One of the items that really jumped out at me was the Winter Dragon. It’s produced y Seasonal Visions and it’s obvious they are trying to capitalize off the popularity of the Game of Thrones with the new animatronic dragon. Sorry, Daenerys Targaryen does not come with the new prop. He’s available now at Halloween Express.

Check out the video of the Winter Dragon in all it’s glory. 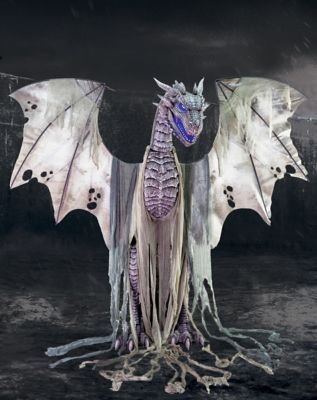 The Winter Dragon stands over 7 feet tall and is bound to be one of the most popular props this Halloween. The creature’s wings and head move back and forth when activated and his eyes light up a light blue. If the Winter Dragon was in Game of Thrones he would obviously be the dragon that the Night King killed and turned last season. Either way, the Winter Dragon would look really impressive standing in your front yard as your friends and family make their way into your Halloween party.

One really cool feature about the dragon that I really likes is the fact that he breathes fire. Well, not really, the Winter Dragon does breathe smoke when activated. You will have to hook him up to a fog machine to get him to do that. But I think if you are going to pay a big chunk of change to bring the Winter Dragon home you may as well spend an extra hundred or so for a nice fog machine to make the prop really stand out.

It’s not known just yet how much the prop will cost. Since it’s made by Seasonal Visions and will be sold in stores I would imagine the Winter Dragon wouldn’t cost more than $300. Typically retailers like Spirit Halloween and Halloween Express try to keep their most expensive props around $199-$249. I just don’t see them pricing the prop over $300, but I could be wrong due to the size and scale of the dragon.

UPDATE: The people at Morris Costumes were nice enough to send me some information after HauntCon and it looks like the Winter Dragon will likely cost around $499.99 at retail. The price could be slightly higher or lower depending on where you find the prop but $500 is going to be about what you will spend.

Last year the most expensive prop at Spirit Halloween was the animated Jack Skellington at $249. The reason that prop cost so much was due to the high cost of the license that the manufacturer had to purchase from Disney so they could make “The Nightmare Before Christmas” star. That extra cost reflected in the price tag at store level where the customer had to cough up a little bit extra to keep Spirit Halloween’s profit margins healthy. The Winter Dragon won’t require a license to produce since it’s an original creation (although somewhat similar to the dragons in Game of Thrones) and therefore shouldn’t cost as much in stores later this year.

More information for the Winter Dragon will likely come out in the Spring. The animatronic dragon will likely be available for pre-order in the summer and it should ship in late August or September. That’s pretty standard for most new Halloween props that are introduced early in the year. But we’ve seen in the past that all items at a trade show don’t always make the cut and don’t get produced. Last year Morbid Enterprises put out an awesome Animated Asylum Joker prop. Fans were buzzing online about where to get it but due to the low numbers of pre-orders they decided not to produce it and sell the prop last year for Halloween.

Stay tuned. We should learn more about the Winter Dragon in the coming months.