New For 2022: Nozzles The Clown From Spirit Halloween 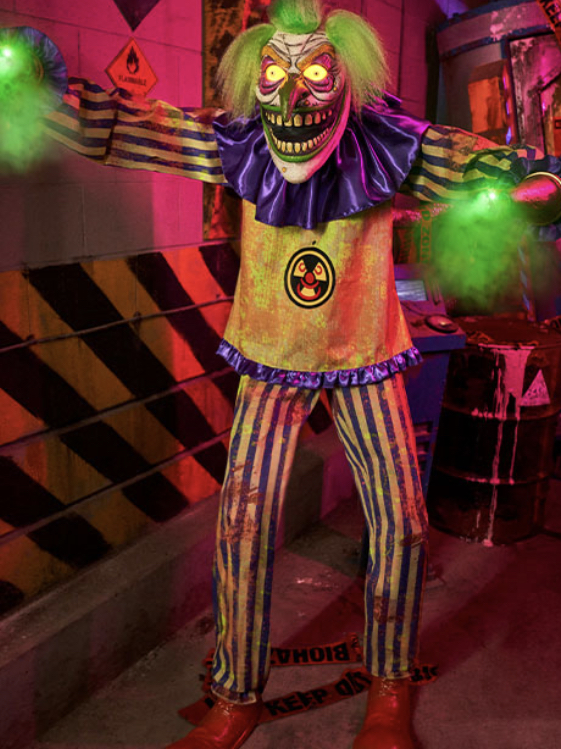 Who doesn’t love creepy clowns at Halloween? Spirit Halloween heard you and will be delivering one of the neatest new clown animatronics I have seen this year. Behold Nozzles the Clown!
If you aren’t familiar with Nozzles, please check out the video below!

Terry was on top of the world. He was a famous clown and one of the world’s greatest daredevils. That is until he fell victim to one of his stunts: a dangerous escape act from a glass tank filled with poisonous gas in front of a live audience. The crowd oohed and aahed as they watched the clown struggle to escape. Terry was told by the circus that the toxic smog couldn’t harm him. But he learned the hard way; You can’t trust anyone. Now, Terry follows the circus from town to town, haunting attendees and dispersing the toxic gas that took his life. Don’t get in his way, or he’ll gas you out, too!

Standing at a menacing six feet tall with his black light responsive clown outfit, Nozzles is an excellent choice to add to any horrifying display. His sinister smile along with his maniacal laugh and flailing, light-up green LED nozzle arms that actually spew fog, are sure to have your guests frozen with fear and gasping for their last breath. Look into his light-up yellow LED eyes as he watches you struggle for air and it’ll be the last thing you see!

“Nothing like a little toxic fog to set the mood – I can’t get enough of this stuff! *Sniff* Get a load of this! Ha ha ha ha! cough, cough”

“Make way for the toxic smog! Pretty soon I’ll have this whole block covered, and then I’ll say ‘sweet dreams’ he he he he!”

“I just ooze with spirit! I also ooze with all kinds of toxic stuff too, uh but don’t worthy – it’s only lethal in large doses. Why look at me – I’m the picture of health! If anything, this’ll probably make you live longer ha ha ha cough cough!”