Spirit Halloween is back at it. After rolling out a ton of hot new animatronics in July they are still introducing new Halloween props for 2017. This week Spirit put the Deadly Roots Animated Prop up on their website. Check out the video below.

Deadly Roots is a huge prop at 6.5 feet tall and weighing 19 pounds. He is activated by a sensor and also works with a step pad which is not included. It’s not known just how many sayings the prop has but he does have at least one that is featured in the video.

“Trespasser, these woods are private! The longer you linger here, the shorter your life will become. Now get out before you permanently become rooted here.”

Spirit Halloween suggests you use Deadly Roots in a covered area but if you really want him to be effective the prop needs to be outdoors. You want trick or treaters or the guests at your Halloween party to walk up to him and be startled when he begins talking. I just hope squirrels will understand it’s not a tree and stay away from him.

I’m really not sure what to think about Deadly Roots. I’ve seen another tree animatronic in recent years but it was so poorly done that I didn’t think I’d ever have interest in a tree prop for my haunt. But after watching the video I’m definitely intrigued and would consider picking him up this year. I do want to see him up close though and will check him out when the big box Spirit Halloween stores start opening in a few weeks. The stores often have a demo of their animatronics set up so you can see them in action before dropping a lot of money on something you aren’t quite sure of.

Deadly Roots might be one of those props I hold off and look for on November 1, when Halloween items are reduced drastically. At $199.99 the prop is pretty expensive. Spirit Halloween usually offers some discount codes on Retailmenot.com and will mail out coupons when their stores begin to open. Deadly Roots is listed as an oversized item so he will cost an additional $20 for shipping. If you buy the prop on Spirit Halloween’s site he won’t ship until mid-September. But you will still have him in plenty of time for Halloween. 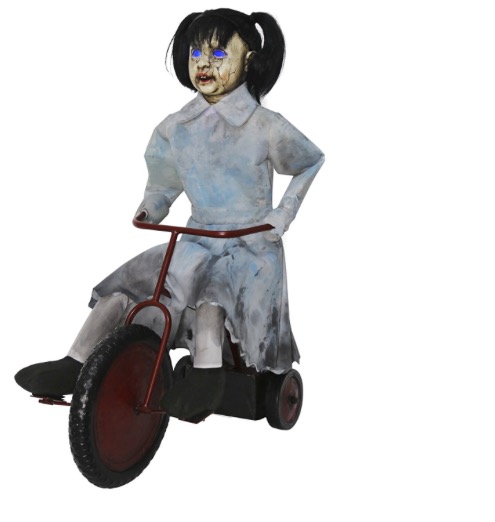 Menacing Molly Swings By For Halloween 2017