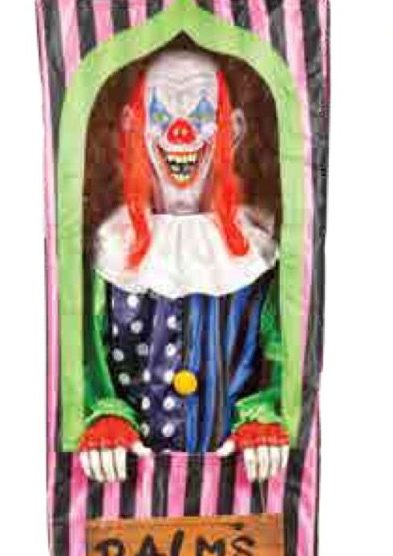 I’ve been dying to check out the Palm Bleeder Booth for several months now and finally came across one of them at Caufield’s in Louisville. If you aren’t familiar with the prop it’s basically a clown in a 6′ booth that sways back and forth as he tried to entice you over to see him so he can tell you your fortune. As you know clowns are red hot this year after “It” went straight to the top of the box office when it came out in September. I imagine that the Palm Bleeder will be a hit this Halloween at your party if you can find him.

I haven’t seen the Palm Bleeders in Spirit Halloween or Halloween Express this year. He’s made by Morbid and seems to be pretty hard to find this year. Here’s a video of the prop in action.

There’s a lot to like about the Palm Bleeder. It’s a pretty simple prop that centers around a clown rocking back and forth in a booth with a flashing light that is activated by a sensor. Like I said earlier, Clowns are red hot and everyone will want to check this guy out if you have him in your man cave or in your backyard for Halloween. It’s lifesize, which is always nice. I like for my Halloween props to be realistic and a 4′ Palm Bleeder wouldn’t cut it. Standing at 6′ it’s a great looking prop.

The one thing I don’t like about the animatronic is that there is a light that turns his face different colors. If Morbid could have made the light one color it would’ve come across a little better. Instead the Palm Bleeder’s face turns red, blue and green as he sways back and forth. Had they put a regular light in there the prop’s white clown face would’ve been plenty scary. I think they may have been trying to hard and a more simple design would’ve been better. That’s still a minor complaint and I think the Palm Bleeder is one of the coolest props I’ve seen this year.

The Palm Bleeder sells anywhere from $185 to $210. I imagine he will be cheaper after Halloween, but then again the prop is so rare he might stay the same and go up next year. Spirit Halloween has been sold out of the 7′ Evil Clown for several weeks. If you look on eBay and other secondary market sites the prop is selling for $100 more than the $250 original price. If you see the Palm Bleeder and really like it, you better grab him. This prop is hard to find and with the popularity of clowns this year you may not see him again, especially since he’s not being sold at big box Halloween stores like Halloween Express and Spirit Halloween.