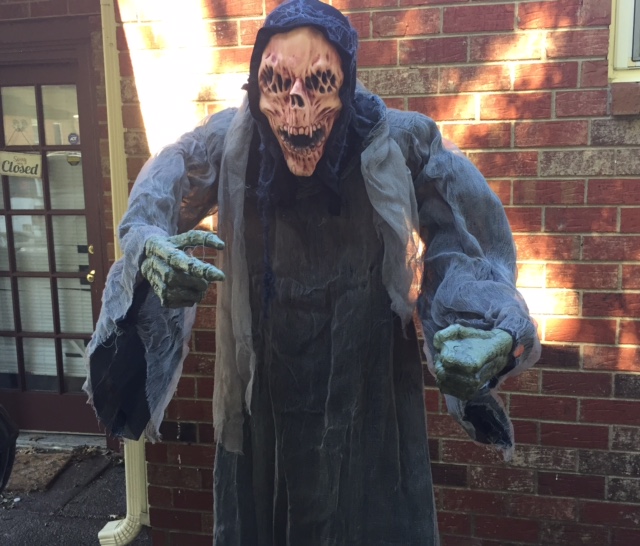 On November 1 2016 I go hunting for discounted Halloween props. Everyone knows that big box retailers like Home Depot, CVS, Rite Aid, Walgreens and Target will mark down their Halloween items 50% to 75% just to get rid of it and make room for Christmas stuff. Big Box Halloween stores like Spirit Halloween and Halloween Express also will drastically reduce their costumes, props and other Halloween merchandise so they won’t have to put it in storage until next year. The day after Halloween is really the best time to buy items if you are looking for a deal. The problem with waiting until after Halloween is that typically the best items are gone and you are left with what’s been picked over. Even if you can’t get an amazing prop for a cheap price doesn’t mean that you can’t turn a bad prop into a good one. All you need is your imagination, a bad Halloween prop and a mask (and sometimes a costume).

The day after Halloween I went into CVS to see what they had left after the holiday. I came across a Spooky Village Animated Grim Reaper. He was originally priced at $50 but saw the manager was marking down Halloween items and I asked her how much for the Reaper. She told me if I bought him today she would reduce him to $19.99. I already have a pretty good Grim Reaper I got very cheap from Rite Aid a few years ago so I wasn’t in a hurry to get another one. I figured $20 was a good investment and I’d be able to turn the cheesy Reaper into something a little scarier. 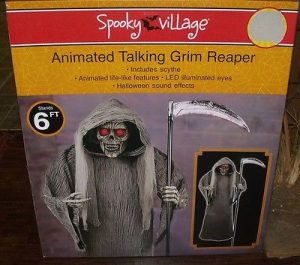 When I finally got the Grim Reaper put together I realized he looked more like an alien than a Reaper. His skull had a green tint to it and I immediately knew all I had to do was cover his goofy face with a mask. The robe he was wearing looked old and tattered so I definitely didn’t want to get rid of that. One thing I did like about the prop is that the robe looks full and I don’t have to stuff it with bubbly wrap to make the Reaper look more realistic. When I went to put the sickle in his hand I realized the manufacturer didn’t cut the right size holes and it wouldn’t fit. Since I only spent $20 I wasn’t too concerned with that. 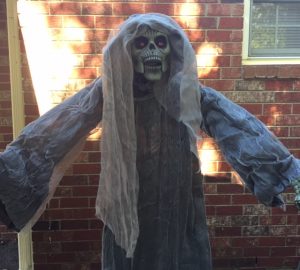 I had a creepy ghoul mask I had used on an older prop that didn’t work anymore. I figured if I put it over the green skull and pull the hood down the new Reaper would look pretty cool. I stuck out his arm so it looks like he’s pointing at you which makes for a pretty cool visual. 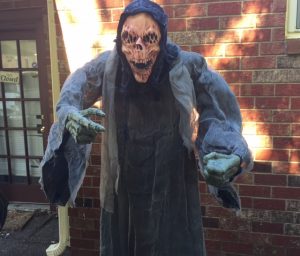 I think with the right lighting the new improved Reaper will be a hit at Halloween. He still has some goofy sayings so I’m not sure if I will have him on or not but I’m certain he will make a good addition to my prop collection. Now I just have to find a spot to put him in the yard during my Halloween party.

For more props I fixed up check out the Making Bad Props Scary part of the site.