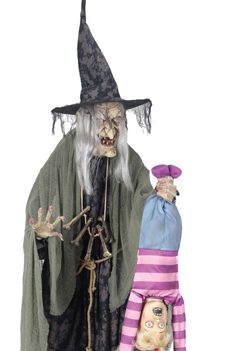 We’ve seen rumblings online that we would be getting some new witches this year from Morris Costumes and now they have finally lifted the curtain and showed us what is available for Halloween 2017. Morris Costumes introduced two new witches on their Youtube page, an animated Stew Brewing Witch and the Cauldron Cat-tastrophe animated Witch.

First up the Stew Brewing Witch,

In addition to the kid screaming the witch has two phrases she says when your guests stumble upon her at your party.

You will make a tasty meal. Do you have any brothers or sisters that would like to visit me as well?

See what happens when you wander into the woods alone? Let this be a lesson for you and a meal for me.

If you aren’t a cat person maybe the Cauldron Cat-tastrophe animated Witch is more your thing. She is very similar to the Stew Brewing Witch but instead of a little girl she has a cat that she has captured and is going to eat for dinner.

The witch also has two sayings which are very similar to the other.

You will make a tasty meal. My favorite is the flash from a black cat but you will do nicely.

See what happens when you cross my path. Let this be a lesson for you and a meal for me.

Both witches can be activared by an infra-red sensor and the Step-here pad that works with just about every other Halloween animatronic we’ve seen over the years. From the looks of it the witches run on a UL power adapter instead of batteries. You can also hook up a smoke machine to the cauldrons to make them more realistic.

The witches are available on HalloweenExpress.com and retail for $269.95. You might be able to find it a little cheaper on eBay. I’ve seen it there for $229.95 but you also have include $20-25 for shipping costs as well.

I haven’t decided it if I’m going to add these to my collection. Both are pretty cool but I do want to check them out for myself up close. If I do get one, I likely won’t buy the other since they are so similar.