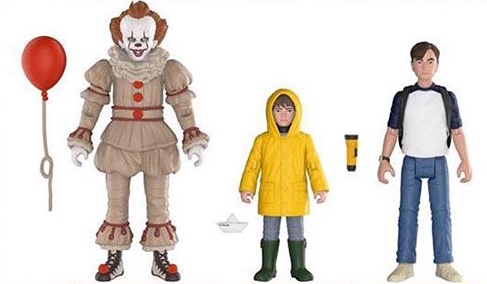 According to Funko the “It” three pack action figures will be released this winter. According to Amazon.com they are available for pre-order and will be released on December 31, 2018. I don’t know if this date is in stone or not. I would think Funko would have these action figures out by Halloween or early December at the latest. Usually something like this will be in stores before Christmas. But I don’t know anything for sure. We’ll have to wait and see when they are released.

The action figures are approximately three inches tall. Of course, Georgie isn’t going to be as tall as Pennywise so he will be slightly smaller. They come with a displayable window box and weigh about 4 ounces each.

The Toy Fair in New York has been really kind to fans of “It” and Pennywise this weekend. With the NECA Pennywise action figures and the Funko three packs featuring the members of The Losers’ Club being introduced in the past two days hardcore fans will now have some really cool things to check off their lists and add to their collections.

The three packs feature items that are very small and could present a choking hazard to an infant so make sure you keep them put up if you do add them to your collection.

Stay tuned. I have a feeling we will see even more Pennywise items coming down the line for 2018.