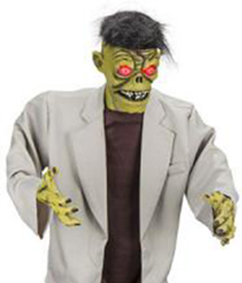 When I think about Halloween animatronics the first thing I think I of is my first animated prop, the Edwardian Butler by Gemmy. I picked him up several years ago the day after Halloween and after that I was hooked on animatronics and Halloween props. Gemmy is still alive and kicking and we are starting to see some of their new products slowly start to trickle out for 2018.

The monster will likely be sold at big box retail chains like Big Lots or Target. Both retailers sold similar props last year that were fairly affordable. The retail price of the Angry Monster isn’t known just yet but I would guess it will be in the $79 to $129 price range. More information will be available this summer when the prop goes on sale later this year.

I like the fact that the Angry Monster is six feet tall. I hate it when you buy props and they are four or five feet tall. Everyone knows that Frankenstein’s monster is tall. So I’m glad to see they didn’t try to save a few pennies by making his shorter.

I’m not really blown away by the Gemmy Angry Monster but I think he definitely has some potential to be pretty scary if you wanted to take a little time and invest a little bit of extra money into him. With a little imagination and a simple Halloween prop you can create something pretty spectacular. Here’s a video of the Frankenstein’s monster I made out of a Home Depot Home Accents 6′ Lab Monster I got from Home Depot in 2016 for less than $20. I added a Universal Studios Frankenstein mask to make the animatronic look a lot more realistic. The mask really made the monster jump out and look like he was the legit Frankenstein and everyone who crossed his path was impressed.

Here’s how it turned out when I got done making him scarier for Halloween last year.

I also added one of those High Voltage Boxes from Spirit Halloween behind Frankenstein to add little something extra. It fizzles and pops as the monster comes alive as people come up to him. The monster grunts and groans and sways back and forth. He really sounds like he’s in a lot of pain. I think it turned out really well. It looked really good at night when it was dark and I had a light shining up at his face.