You knew it was coming. Someone was going to make an officially licensed Pennywise prop from “It”. I just didn’t think that the prop was going to come from Party City. But it is. Behold, Pennywise The Dancing Clown… 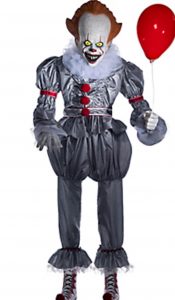 I’m not sure what to think about Pennywise. I’ve been waiting for someone to make one and knew it was only a matter of time before we saw it. I think the costume is fairly well done but the face looks a little hokey and very unrealistic. The prop is not a static prop. According to Party City’s website the animatronic will light up and move around. Pennywise has so many unique and cool phrases from the movie to choose from I bet the manufacturer had a blast picking out what exactly Pennywise would say when he was activated. 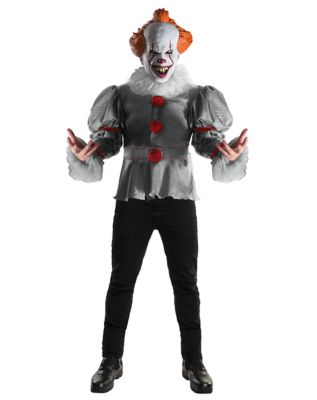 Make your own Pennywise prop with an adult costume [More]

From the looks of things Pennywise’s eyes light up when he is triggered. He does move around according to Party City but with no video just yet anything else would be speculating. The prop stands at six feet tall and will have to be assembled.

I definitely want to see Pennywise up close when he makes it to Party City stores. If there wasn’t a Pennwise prop for Halloween 2018 I had planned on making my own out of a mask I bought for half price the day after Halloween last year. I still could use the mask on the prop depending on how realistic the face looks up close and personal.

The Pennywise prop costs $174.99 and will be available online on August 1 and in stores in September in time for Halloween. As popular as “It” was last year I imagine Pennwise will be in demand this year. Spirit Halloween sold out of their 7′ Evil Clown animatronic in three weeks in 2017. If you want Pennywise you’d better snatch him up sooner rather than later. I bet this prop goes fast when he finally hits stores.