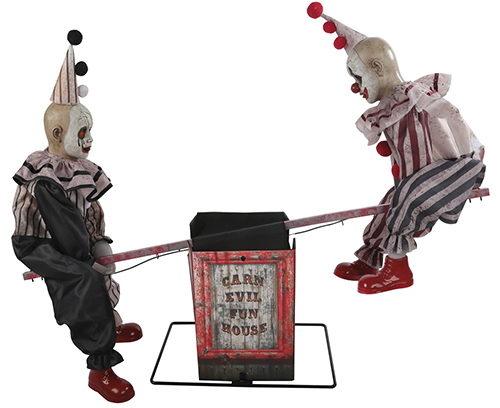 Just when you think you’ve seen every clown animated Halloween prop there is, Morris Costumes comes in and introduces a new instant classic everyone will want to add to their collection. Halloween fans loves clowns props but ever since “It” came out in theaters last September they’ve been more popular than ever. For 2018 Morris Costumes has introduced the See Saw Clowns animated prop to tap into that clown niche that is on fire right now.

Check out the video below from HauntCon in New Orleans.

The See Saw Clowns prop is very similar to the See Saw Playground Dolls we saw last year. Instead of the creepy dolls we get two creepy clown dolls going up and down very slowly on a see saw. Ironically enough, the see saw is called “Carn Evil Fun House”

According to the manufacturer the See Saw Clowns will likely retail for $169. This price could go up or down slightly depending on which retailer carries it and how aggressively they want to price the prop. The See Saw Clowns will be available in the summer when other Halloween props start to pop up for sale online.

The See Saw Clowns prop is activated by a Step Here pad or by a sensor that can be activated up to 6.5 feet away. I think this prop would go great with a clown scene at your very own haunted house or Halloween party. I like to make a massive clown tent and put a bunch of animatronic clowns in it. People walk around inside and the clowns move around and jump out at them. My wife told me last year she thought the clown tent was missing something and I think the See Saw Clowns could be it. If I put them in the middle of the tent and placed things around them it might look pretty creepy.