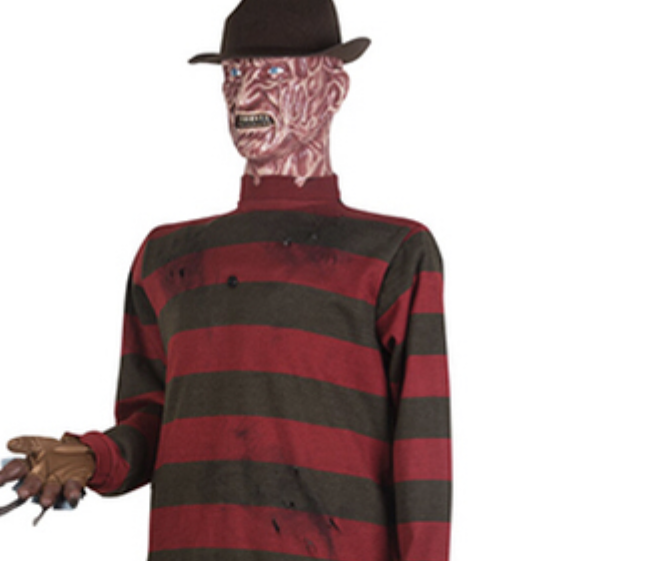 One, two, Freddy's coming for you. Three, four better lock the door...

If you are as big of a Freddy Krueger fan as I am you will be thrilled to learn that he will be returning for Halloween 2019. Halloween Express quietly added him to their 2019 collection over the past few days. We haven't seen a mainstream Freddy animated prop since 2011 when Spirit Halloween rolled out an animatronic for the remake of Nightmare of Elm Street. Unfortunately that movie wasn't received very well by fans of the original franchise.

When activated Freddy's arm move up and down and his fingers begin to move. The Nightmare on Elm Street star has two different phrases he will begin to say.

"I'm gonna split you in two and we'll play skin the cat! Hahahaha!"

"My name is Freddy! Welcome to my nightmare! Hahahahha!"

Freddy won't come cheap either. He costs $249.95 and that doesn't include shipping and handling either. But you have to factor in the fact that the manufacturer of the prop had to pay a hefty fee for the rights to produce a Freddy animated prop. That cost always gets passed on to the customer and probably adds $50 to $100 to the price.

I like the fact that someone is bringing Freddy back. However, I do want to see the prop up close before I decide to pull the trigger. This is a prop that may not be around for 2020 so waiting to see if he is half-price on November 1st likely will bot be an option. I've learned the past to pull the trigger in the past because I've seen so many cool props become sold out before Halloween and I end up kicking myself for not grabbing them when I had the chance.

Be sure to check out our Animatronic Halloween Store to see what's new for 2019!
Halloween will be here soon. There are a lot more cool things coming down the pipe so please keep checking back.