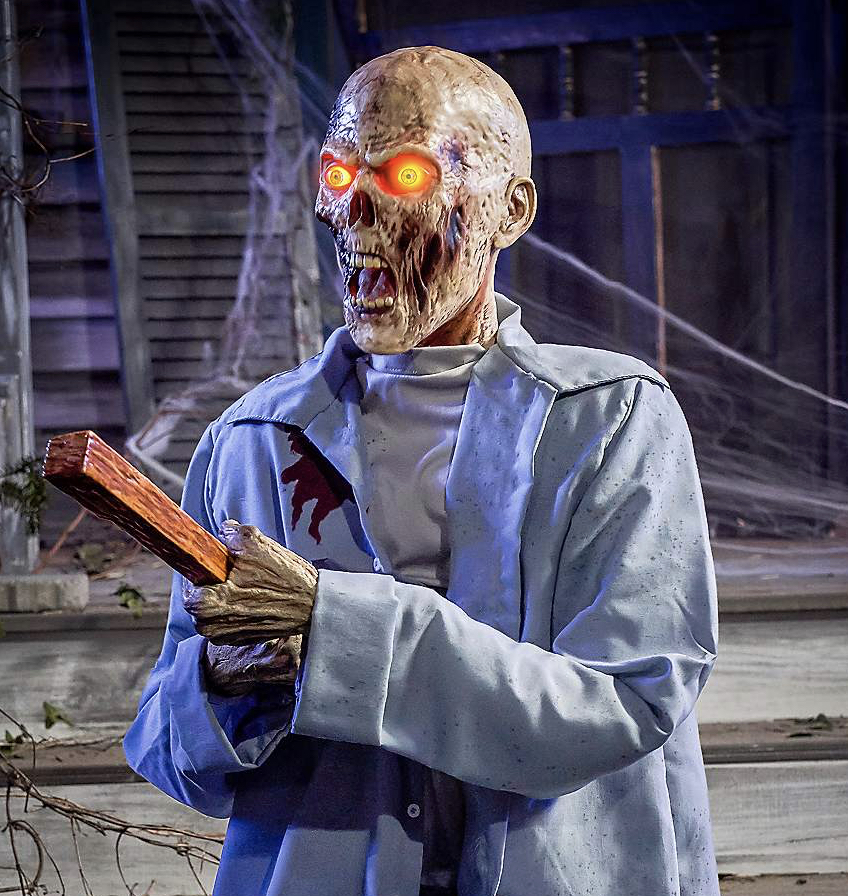 It’s the most wonderful time of the year! Spirit Halloween is dropping new animatronic Halloween props left and right and today we get to see their latest offering, Punctured Pete!

If you aren’t familiar with Punctured Pete, maybe this video can get you up to speed.

Pete’s life was pretty simple. No cell phone, no internet, and no TV. Each morning, he wakes up and shaves, showers, eats breakfast, and downs a cup of coffee before heading to open up the wood mill. Unfortunately for Pete and his wife Marie, they had no idea that an experiment gone wrong set loose a horde of zombies. Pete tried his best, but they got him long before the buzz saw kicked a sharpened piece of timber through his chest.

When activated by a step pad or a sensor Punctured Pete’s eyes begin to glow and he groans. He also begins moving back and forth desperately trying to remove the object that impaled him.

I kinda like Punctured Pete. I like the way he rocks back and forth and you get the sense that had he not gotten a big piece of wood stuck in his stomach that he would be coming after you and looking to take a bite out of whatever he could get ahold of.

On his knees, Pete stands right at 41 inches. He is pretty easy to put together and weighs just over eight pounds.

At $169.99 Punctured Pete is reasonably priced. According to Spirit Halloween he is married to Miserable Marie (also a new prop), and would’ve been nice to see them paired together for a slightly cheaper price. But then again, some people may like Pete but not Marie, so it probably works out better that way.

Keep checking back. There is more cool stuff coming our way in the coming days.You aren’t going to want to miss out!