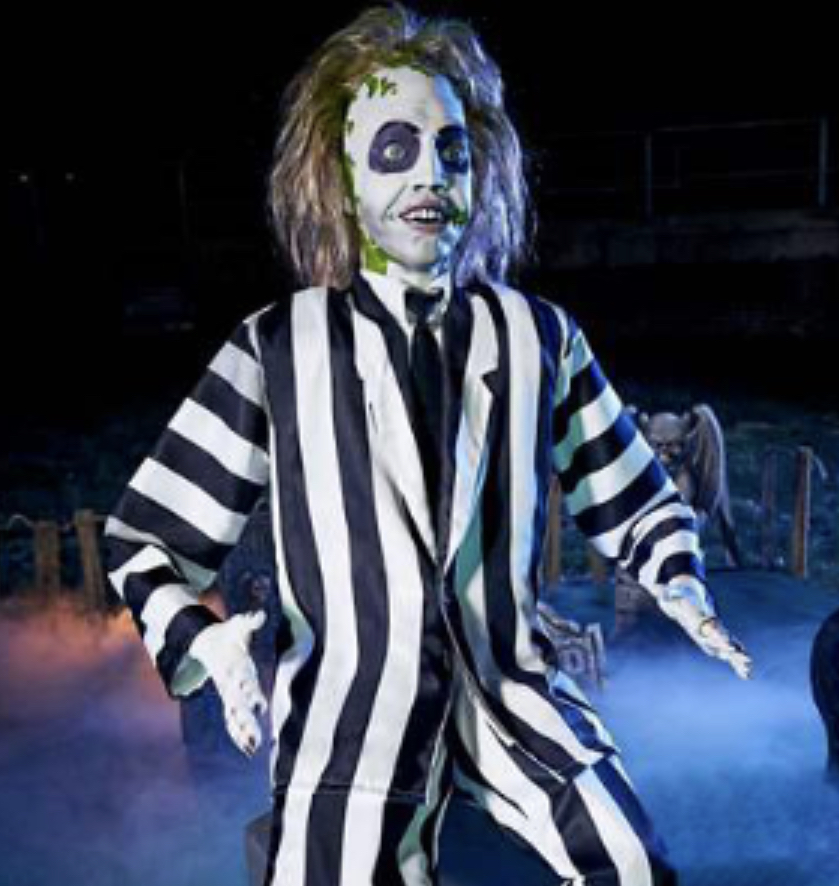 Please check out the video below to see what the hype is all about. Also, subscribe to our Youtube channel.

Need a scare done right? Say “Beetlejuice” three times and the perfect man for the job will appear! A true undead professional, Beetlejuice’s bold personality and even bolder style will freeze anyone in their tracks. His over the top presence and rude jokes are enough to overwhelm any person living or dead and once summoned, getting rid of him is not always so simple, just ask the Maitlands. After failing in his plan to escape the Neitherworld and roam the world freely by marrying Lydia Deetz, he was sent to the waiting room for the deceased where he waits for the next unlucky person to summon him to roam once again.

When activated by a step pad or sensor Beetlejuice begins moving from side to side as he begins to say some of the following legendary phrases.

“I’m feeling a little, ooh, anxious if you know what I mean. It’s been about six hundred years after all. I wonder where a guy, an everyday Joe like myself, can find a little action”… “Now! Let’s turn on the juice and see what shakes loose.”

“I attended Juillard. I’m a graduate of Harvard Business School. I travel extensively. I lived through the black plague, and I had a pretty good time doing that. I’ve see the Exorcist about 167 times and it keeps getting funnier every single time I see it!”

“I’m the ghost with the most babe.”

“You know, you look like somebody I can relate to. Maybe you could help me get out of here, you know, because I got to tell you, this dead thing…it’s just too creepy.”

“See, here’s my problem. I got these friends I said I’d meet, and it’s the kind of thing where I have to be there in person, so could you help me get out of here?”

If you are a fan of Beetlejuice, this prop is a must have. Sure, there have been other Beetlejuice props, but this one is sitting down and looks to be both menacing and mischievous. Retailing for $279.99, the new Beetlejuice prop isn’t cheap but like I said earlier, it’s one of those animatronics that fans of the film will have to have!

Keep checking back! There’s more cool stuff on the way!