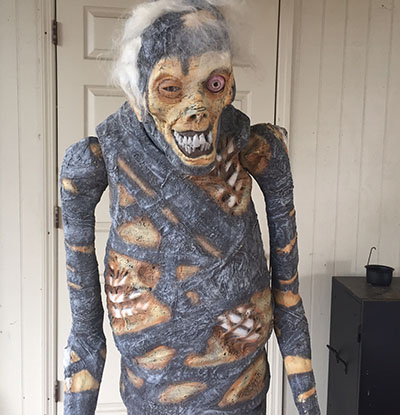 Last year on the day after Halloween I was checking out my local Halloween Express. I had been to this location several times checking out Halloween props leading up to Halloween and had a few picked out that I wanted to pick up for a reduced price. As we all know big box Halloween stores such as Halloween Express and Spirit Halloween drastically reduce prices on inventory so they don’t have to put items into storage until the next year.

At this Halloween Express they had the animated Shivering Mummy prop that costs $300+ online and I was hoping I could get a good deal on it. The prop is top notch and looks very realistic. There is a reason why he costs so much and quality like that isn’t cheap when it comes to Halloween animatronics.

Before Halloween the prop was selling for $250 because some of his fingers were missing. Closer to Halloween he got reduced to $150 and as it got closer to October 31st I was anticipating someone snatching him up. But something strange happened. Instead of moving him by the front door where everyone who came in Halloween Express could see him someone at the store moved him towards the back by the women’s costumes. I wondered why he was moved to such a bad spot in the store and when I went in on November 1 he was standing there all by himself just waiting for me to take him home.

It turns out the manager moved him to the back of the store because kids were tugging at his fingers when he was up front by the register which is why he was missing a few digits. I actually didn’t mind that he was missing some fingers and thought it actually added a little depth to the prop since a real mummy would likely be missing appendages too from wear and tear over a thousand years.

I picked out another prop, Bernard the Butler I wanted who was marked down to $50 since everything had to go. I asked the manager at the store if he’d take $100 for both the Butler and Mummy since they were trying to get rid of inventory. He thought about it for a few minutes and agreed. I was about to leave with $500 worth of Halloween animatronics for $100. Sure, I would’ve loved to had them the day before for Halloween but I could keep them in my garage until next year just so I could add them to my collection.

Here’s the Shivering Mummy in action.

Here’s a listing for Amazon.com where you can find the prop for sale this Halloween. This year Spirit Halloween and Halloween Express won’t be offering him so you have to buy him online.