UPDATE
The High Voltage Zombie is finally here and available for purchase!

We knew something big was coming but we didn’t know exactly just what. Spirit dropped a teaser on their website earlier this week that showed something getting electrocuted and the internet was baffled by the video.

Today Spirit unveiled their next animatronic prop on their site for the whole world to see. Meet the High Voltage Zombie. 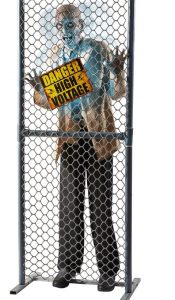 According to the site,

It’s said that no one has made it out of Black Isle East Penitentiary alive. Now we know why. They’ve all been fried alive by an innocent inmate, wrongly convicted for his crimes. Now he punishes every trespasser the same way he was: death by electrocution. His eyes will convulse and glow as the electricity courses through his undead body, waiting for his next victim to meet their own shocking end. He’s done his time, now so will you!

The zombie prop doesn’t talk but he does make some uncomfortable sounds as we hear the sound of electricity in the background as it races through his body.

You can find the zombie exclusively at Spirit Halloween for $229.99. The prop is available for pre-order and will not ship until later this month according to the site. This time of year most sites are doing pre-orders since the manufacturer likely hasn’t sent the item to Spirit’s warehouse. It is still a little early for Halloween stuff but in another month or so the site should have everything in stock and ready to go.

I’m not sure what to think about the High Voltage Zombie. I’m definitely interested but he’s a prop I want to see up close before I drop $230. The video and picture look great but checking animated props out in person is usually the way to go since they are so expensive. Another issue I have is that I don’t have a fence on my property to attach the prop to. It’s appealing but I just can’t prop the fence and zombie up beside the house and have it look right since it’s just one small section of a chain link by itself.

I think I may roll the dice and wait to see if the Zombie is available the day after Halloween for 50% to 75% off when big box Spirit locations are trying to get rid of all the merchandise before they have to vacate the building they rented for a short time. Usually the business owners don’t want to pay to put such large items in storage until the next year when they can try to sell it for full price.

But all that could change when I see the zombie close up and I may decide to bring him home immediately. 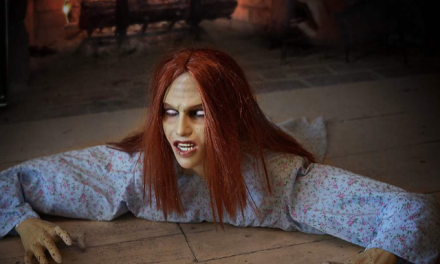