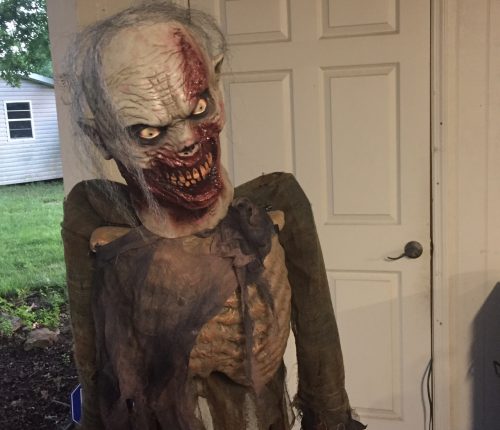 Waiting until the day after Halloween to buy discounted props is always a crap shoot. Most of the stuff is picked over and the good stuff is gone. Also, a line forms before the store opens and usually the store opens at a different time than it did before Halloween so you don’t really know when to get there to be ready for the deals. But usually you can find some good stuff and the managers are eager to give you a deal to get rid of inventory that they don’t want to pack up and store until next year.

The day after Halloween 2016 was a good day for me as I stocked up on discounted props all day. I went to two local Halloween Express’ and a Spirit Halloween store and brought home several new props for next year’s party. Well next year is now here and it’s time to start getting things in order for the big Halloween party in a few months. Today I put the finishing touches on the animated Twitching Zombie Prop I picked up from Halloween Express. The prop retailed for over $200 initially but when I got it the day after Halloween the manager told me that all the props had to go and let me have the zombie for only $50.

Here’s the original prop in action without any modifiations.

The prop isn’t too bad but it’s not really that scary. It’s basically a skeleton that has green eyes who swings around like he’s lunging at you. It has potential and I knew I was could take it to the next level.

As I was walking through the same store that day I came across a Furious Walker mask that was priced at $52.99. The manager told me it was also halfprice so I left the store spending around $80 for the zombie prop and mask. I thought about using the mask with another prop I was trying to improve but as was working on them today I realized that the mask belonged with the Twitching Zombie.

When I put the mask on the prop it looked great. Now instead of a skeleton lunging at you there is now a zombie lunging out trying to bite your neck. See for yourself.

Anytime you can buy a cheap prop for less than $50 you should jump on it. If you have the base and frame you can take it from there and make something special. All it takes is a little imagination and a new mask and/or clothing to make a bad prop great.