The Strangers: Prey At Night Masks New for 2018 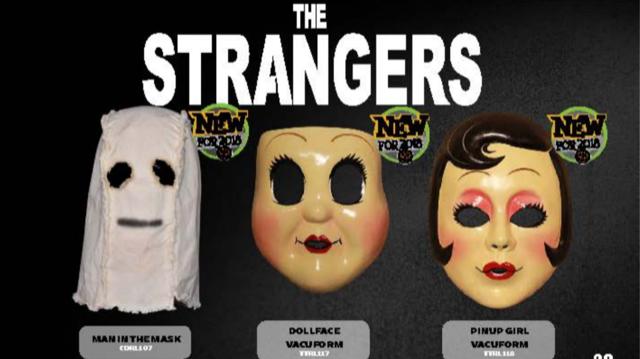 The Strangers made their way to the silver screen in 2008 and although it wasn’t a breakout hit the film did resonate with a pocket of passionate fans who kept the flame alive for a sequel. Their patience has been rewarded and they will get a sequel ten years later. The Strangers: Prey at Night will be released in March.

With the new Stranger movie on the way Trick or Treat Studios will have three new masks from the protagonists of the film available for Halloween 2018. Dollface, Masks for Pin-Up Girl and Man in the Mask will be available later this year. If you have to have a mask right away there is one available from Amazon.com.

The guys from Trick or Treat Studios posted some pictures of their new masks to their Facebook page last week. Here’s one of their staff members wearing the Man in the Mask mask. It’s now available on Amazon.

Not much information is available about The Strangers masks. The three new masks aren’t even available on TrickorTreatStudios.com. I was told by someone at Trick or Treat Studios to keep checking their Facebook page for updates about new merchandise. They told me that March was the tentative date for pre-orders and more information would be available at that time.

If I had to guess on the price of the three new masks I would say anywhere from $49.99 t0 $79.99. I compare The Strangers masks to the American Horror Story masks that run about the same at retail. But anytime you have to factor a license into the equation it could cause the costs to rise. The manufacturer had to pay the film studio to obtain the license which gave them the rights to make the masks. That cost is factored into the retail price and it will cause it to go up.

Keep checking back for more updates. Halloween 2018 isn’t that far away. We are closer than we were yesterday.