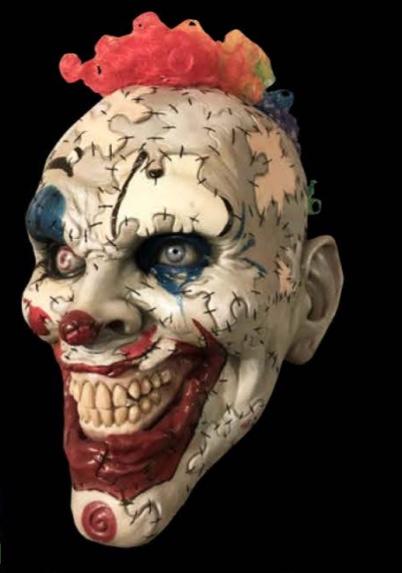 We knew the American Horror Story: Cult masks were coming sometime this year and now we have a little more info. Puzzleface and Holes will also be available from Trick or Treat Studios in 2018. We reported that the Flip Flop mask worn by Ivy on the show will be available later this year. Now with three of the AHS: Cult masks set to debut this year you and your friends can go out dressed as member’s of Kai’s cult.

Here are the American Horror Story: Cult masks from Trick or Treat Studios on display at Hauntcon last week in New Orleans.

Puzzleface is worn by Meadow (Billie Lourde), Kai Anderson’s sister on the show. The mask is now available on Amazon.

“Holes” was worn by Harrison (Billy Eichner). He was Ivy and and Ally’s (Sarah Paulson) neighbor who worked at a gym. This mask is also available on Amazon.

I’d really like to see Trick or Treat Studios make the Trifaccia clown mask. That’s the three sided mask worn by Kai on the show. That mask would likely cost a lot more due to it being a high quality mask with three sides. It’s probably something that they looked at decided to hold off on because it would cost a lot more than the other masks they produced from American Horror Story: Cult. Masks from the show run anywhere from $49.99 to $79.99. the Triafaccia mask would likely sell for over $100 at retail.

We won’t know the price of the new AHS masks until the Spring. The Flip Flop mask is available on Amazon.

It’s also available for pre-order on TrickorTreatStudios.com I reached out to Trick or Treat Studios for more information about the new AHS masks and was told that to check their Facebook page for updates. New info about their new items will be available in March. Typically new Halloween items are available for preorder in the spring or summer and don’t ship until late August or September.

Halloween will be here before you know it. It’s good to see there will be a lot of new items this year from such a popular show like American Horror Story.