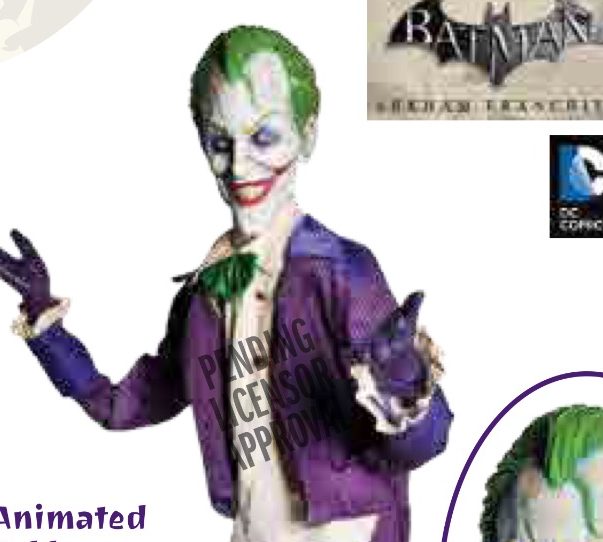 We are four months away from Halloween and it seems like each day new things drop from top Halloween prop companies all over the country. One of the most popular prop makers, Morbid Enterprises rolled out their catalog earlier this year and we are still waiting for their new items to hit the market. In their defense new props don’t usually come out until August so we are still a few months away.

In January we got a sneak peak at what’s coming up for Morbid in 2017 at the Halloween & Party Expo. Check out the video for a quick tease.

What immediately jumps out at you is the Animated Arkham Joker greeting you as soon as the video starts. As soon as I saw him I knew he would make a great addition to my collection. In fact, I think the Joker would fit perfectly in my man cave as opposed to my garage where the Halloween props go until it’s time for my Halloween party in late October. 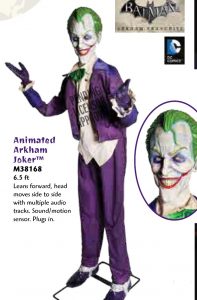 Even though it is still a little early I’m afraid the Joker may not see the light of day. In the Morbid Catalog you can see the prop with a big stamp that reads “Pending Licensor Approval”. This means that the prop in the catalog will be released if Warner Brothers, who owns the rights to the Batman brand will sign off on the animated Joker and greenlight him for production. Just because he’s in the catalog doesn’t mean the Joker will be showing up at Halloween Express in a few months. I actually reached out to Morbid for comment about the prop but have not received confirmation that they received permission to release the Joker. I guess we will have to wait and see if he is released in a month or two.

My second favorite prop in the catalog, like the Joker, isn’t even a Halloween prop at all. Star Wars fans will remember the Wampa that attacked Luke Skywalker on Hoth in The Empire Strikes Back. Morbid made a Wampa prop for 2017 that stands over 8.5 feet tall.

Unfortunately the Wampa is also pending licensor approval so we have to cross our fingers that Disney will allow it to be produced. The Wampa is scary enough to be a great addition to your Halloween party but it’s also cool enough to go in a man cave.

I’m a sucker for creepy clowns and have several in my collection so it’s not a surprise I fell in love with the Animated Palm Bleeder Booth. 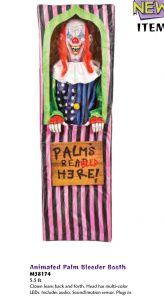 Morbid stuck a clown in a booth and made him rock in and out to mess with you and your friends at your Halloween party. It’s a simple prop but it works perfectly. Like the Wampa and Joker the Palm Bleeder Booth isn’t available just yet but I’m confident he will be released since no one owns the license on him.

My other two favorites from Morbid in the 2017 catalog are things from last year. Both are pretty cool but I’m hoping they can add a little something to them to make them more realistic.

Everyone loves Beetlejuice. As a kid I can remember seeing the film for the first time thinking this is the craziest thing I’ve ever seen. Now you can bring Beetlejuice home and display him at Halloween. 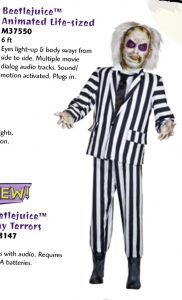 I think the Beetlejuice prop is cool but would like to see them make him a little more lifelike. I understand it’s hard to make an affordable prop look just like a character you see on TV but it would be nice if the prop’s arms moed instead of just rocking from left to right.

Last on the list is The Animated Asylum Straight Jacket prop.

This guy us pretty creepy. When you stick a prop in a straight jacket rocking back and forth in a corner with a strobe light in front of him you have Halloween party gold.

My only complaint with The Animated Asylum Straight Jacket animatronic is that I wish they could’ve accented his straight jacket. I’m afraid in the dark, with little light it will be hard to tell what’s he’s wearing but that’s only a small gripe.

Halloween is rapidly approaching and it’s only a matter of time before we see the new stuff from Morbid in stores.