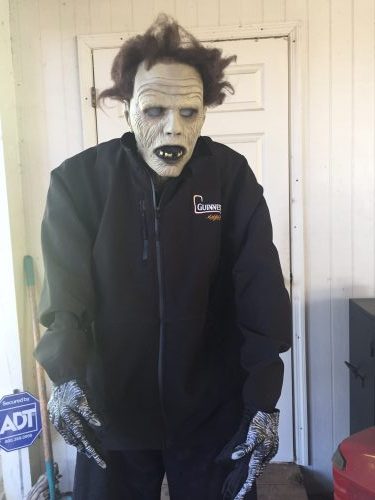 Two years ago on the day after Halloween I was walking around a CVS seeing what kinds of things that had marked down after the holiday. I found a cheesy Animated Vampire Skeleton for 20 bucks and thought at that price it would foolish not to get him. I knew I would never display the piece because he was very cheesy but thought I could at least do something with the frame and make him into something worth putting out for my Halloween party. 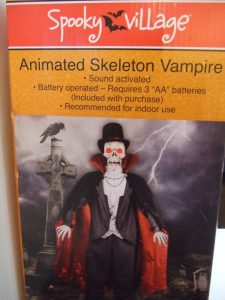 The following October I remembered I had the cheesy vampire skeleton in my garage and started thinking about what to do with him. I took a trip to my local Halloween Express and checked out all the masks that were available. I figured I could get a mask to cover up the silly skull and go from there. One of the first things to catch my eye was the Day of the Dead Bub Mask. Here’s a link to it if you want to get one for yourself.

I got the mask for around $40 and decided to make the vampire skeleton into a zombie. I had a 2XL jacket in my closet that I won in a contest a work that I had never worn. The jacket was big enough to cover up the cheap suit the original animatronic had on. I could still use the black pants that came with the prop and just cover up everything else with the jacket.

When I was finally ready to assemble my masterpiece I slipped the mask over the skull and then put the coat over the prop. I got some cheap zombie gloves to cover up the skeleton hands and I was all set. I put a light under him to accent his face which looked totally creepy.

Unfortunately for me one of my neighbors knocked him over which resulted in a decapitation at my Halloween party and I had to re-attach his head with some zip ties. But the prop is still going strong and my wife actually told me that he was actually one of the creepiest things I had out last year.