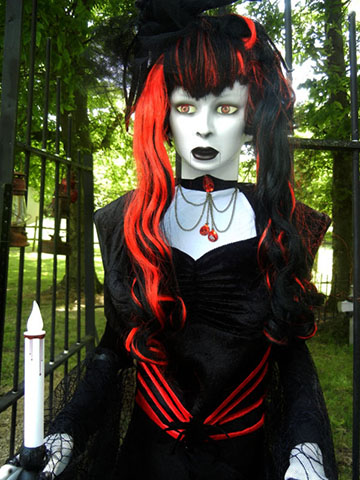 Halloween has finally come to Lowes for 2017. We started to see a few props trickle out last week but this week the animated props hit the salesfloor. The one I’ve had my eye on is the Black Widow/Black Countess that is made by Gemmy for Lowes “Haunted Living” collection. The Black Widow is the best prop I’ve seen at Lowes this year. Here she is in action.

Gemmy is one of the OGs of affordable Halloween props and I was really excited to see what they made for 2017. They used to churn out several lifesize creepy animtronics out every year but now seem to be making more smaller Halloween decorations as opposed to big animated props. You can imagine my excitement when I saw the Black Widow was going to be new for this year.

The Black Widow stand just a little over 6 feet tall and speaks seven phrases to creep out the guests at your Halloween party.

It’s always so nice to see my prey come to be so willingly.

To get the Black Widow to speak you have to activate her. The sensor is located just below her belt. She is activated by sound and movement. The prop runs on 4 AA batteries which are included.

The prop retails for $119 at Lowes and is also available on Lowes.com.

There’s a lot to like about the Black Widow from the realistic face to her creepy outfit. There are some concerns as well. I hate how her mouth moves. It’s like Pinocchio and looks more like a puppet than a Halloween prop. I’d rather how mouth not move like other Gemmy props like the Edwardian Butler than look like a puppet when she talks.

I’m also not a big fan of the eyes that light up. I like the fact that her eyelids close when she’s not talking so it has the illusion of waking her from a deep sleep. But when the eyes glow in the dark it kills it for me. I wish that Gemmy would go back to the way they made the eyes move on the Edwardian Butler. On that prop they eyes are not LED and shift from side to side instead of being lit up and then looking around.

For $119 I think I will pass on the Black Widow until closer to Halloween or November 1. Big retailers like Lowes and Home Depot generally slash prices the week before the Halloween and then drop the price even more after Halloween. I have a feeling that the Black Widow will be around for a while in the stores so it’s probably going to go down in price. However, I did learn from talking to a salesperson at Lowes that each store was allocated only three Black Widow animated props this year. So if you see they are down to one or two and you really like her I suggest you grab her and take her to the register.