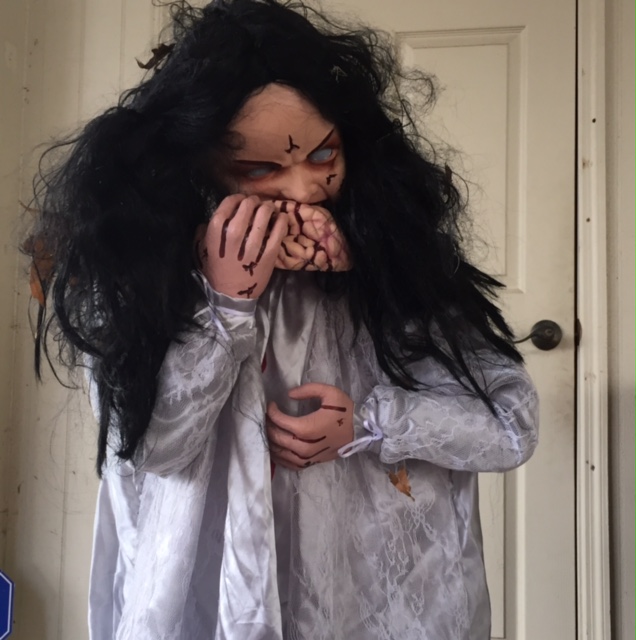 Rosemary is one of my favorite Halloween animated props. I got her in 2014 on the day after Halloween at a big box Spirit store in Nashville. When I got to the store there was a line about thirty people deep who were all waiting to get their hands on some half price Halloween merchandise. When I got in the store I ran straight back to the animatronics and asked a manager how much the floor model Rosemary was. The manager told me I could have her for $50. Done.

I was glad to add Rosemary to my collection even though she had a few issues. For one, one of the stands she sits on had broken off. The prop is built with a strong base with four sides to hold her to the ground when she launched out at her victims. With one of the bases broken off she fell instead of lunging. To fix this I added some bricks to the side of her base where the base was missing. The bricks keep her stable and she works properly now.

Another flaw with Rosemary is her left arm is broken. I haven’t really messed with it because it’s so hard to see in the dark. She still munches on the brain even though one of the arms doesn’t move. The arm just dangles to her side as she lifts the brain to her mouth with her right arm. Her eyes still light up and she is still extremely creepy.

Rosemary is one of my wife’s favorite animatronics too and she always creeps out our guests at the Halloween party we throw every year. When you first approach the prop you notice the disheveled hair and blood on her night gown. Then as you get even closer to the prop you hear children singing “Ring Around the Rosie” until it gets eerily quiet and then Rosemary jumps out at you.

Here’s a video of Rosemary in action.

From what I understand Rosemary was discontinued last year but she’s still around on the secondary markets like eBay and Amazon.com but she will cost you several hundred dollars. I highly recommend Rosemary and adding her to collection if you can find her for a reasonable price. With the popularity of The Walking Dead Rosemary’s value has increased every year since they stopped making the prop. It’s very hard to find.