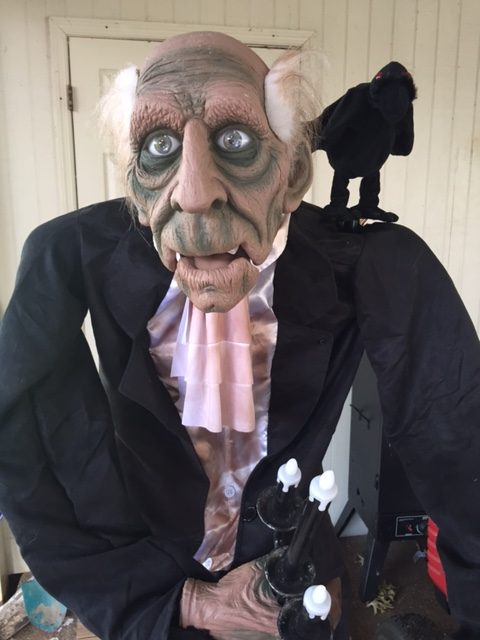 I stopped into my local Halloween Express the day after Halloween last year to see what was available. A lot of stuff was picked over and you couldn’t find any Harley Quinn costumes anywhere. That’s ok. I’m an animated prop guy and luckily for me the big ticket items were mostly still there.

I picked up an Animated Bernard Butler with Raven prop for 75% off the sale price. Originally he was priced at $199 but he was marked down to $100 the week of Halloween. Surprisingly enough no one bought him and he was still there on November 1 when I stopped in. I asked the manager of the shop how much the Butler prop was. He said everything was half off. Since the Butler was already marked down to $100 I didn’t think they’d go down on the price any further. To my surprise the manager of the store he’d sell the animatronic to me for $50 because everything had to go.

Bernard has two sayings and interacts with the Raven that is on his shoulder.

Bernard: Once upon a midnight dreary, while I pondered weak and weary.
Raven: Nevermore, Nevermore
Bernard: Quiet, please.
(Raven squawks)
Bernard: I haven’t even got to that part yet. Is anyone in the mood for a nice raven stew?

Bernard: Please don’t be afraid of my little friend. He doesn’t bite.
(Raven squawks)
Bernard: Really? But I thought you had given up on eating flesh.
Raven: Nevermore, Nevermore

Bernard will make a fine addition to my collection and will likely be a prop that keep in the kitchen or living room to keep guests entertained during my Halloween party.