How to Make a Zombie Pit for Halloween 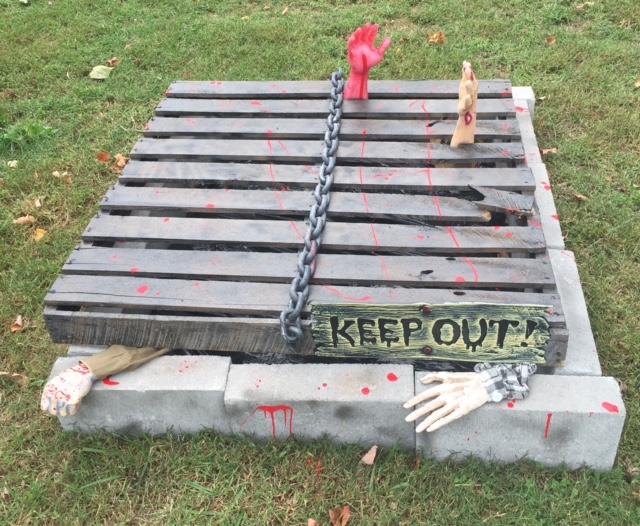 Last year one of my neighbor’s made a zombie pit out of a pallet and some concrete blocks. Ever since my wife saw it she has wanted me to make one so this year I got the supplies and put it together in my front yard.

First of all you will need to take the wood boards off the bottom of the pallet. I screwed them on the front on the pallet where the forks would go to make it look like it’s a lid for a zombie pit. Get the spray paint and paint the top and sides of the pallet. Make sure you get inside the boards too and paint in between them. After thirty minutes or so when the paint has dried turn the pallet over and paint underneath where anyone might see the wood as look down from the top.

Then place the concrete blocks on the ground so that the pallet will set right on top of it.

Next cut an extra large garbage bag in half and spread out so it covers the grass. This will make it look like the zombie pit is deep.

Get some zombie arms and place them so it looks like they are trying to escape the pit.

I placed a zombie head in the corner of the pallet with the arms about a foot under it to make it look like a zombie in the pit trying to escape. I found a cheap zombie head at a Halloween store but you can use a zombie mask if you want to.

Next I put drops of red paint all over the pallet and bricks to make it look like someone or something bled all over the place trying to escape.

I found a really cheap plastic chain at a Halloween store that I put on top of the pallet to make it look like the pit is secured and nothing can escape.

The last step was placing two strobe lights inside the pit. I put one the far right corner by the face and hands and I put the other in another front left corner.

All in all I only spent about $30 to make the zombie pit. The concrete blocks were around a dollar each at Home Depot. The arms were anwhere from $5 to $12 each and the zombie face was $15.

Here’s a video of the finished product shot in the day and also at night.