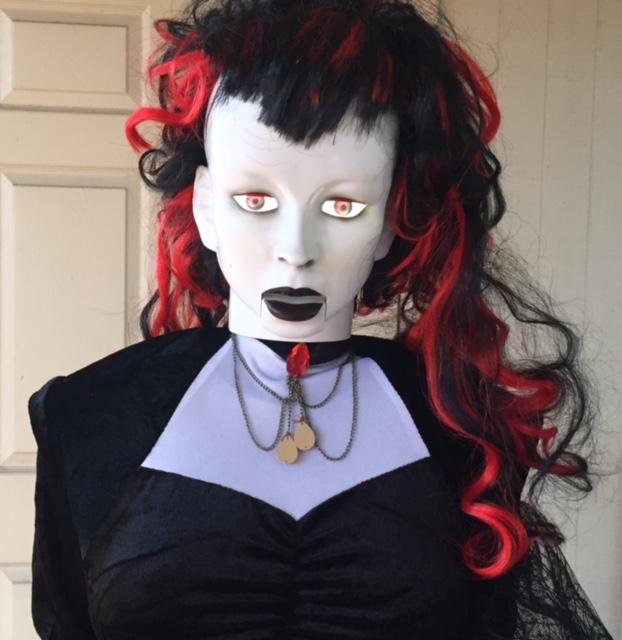 “Wow, she’s tall!”. That’s the first thing my wife said when she walked into the living room to see the Holiday Living Black Widow for the first time. Like me, my wife fell in love with the animated prop when she first saw her.

It’s not often you find vampire Halloween animated props. It’s even more rare to find a female vampire. I’m not sure if the Black Widow is a vampire but that’s what she looks like to me with her very pale skin.

I have had my eye on the Black Widow since I first saw her at Lowes back in September. I had told myself I wasn’t going to pay $119 for her though and would wait and see if she was still around once they started marking down the Halloween merchandise closer to the holiday. Last week when they took 30% off of their Halloween items I almost pulled the trigger. I thought $89 was a fair price for the Black Widow animatronic but since the store I visited still had two props left I took a gamble and waited until they went 1/2 price before pulling the trigger. When I went into m local Lowes they had gone to half price on all the Halloween items and they still had one Black Widow left. I wasted no time and brought her home with me.

The Widow was pretty easy to put together. I did pinch one of my fingers trying to secure one of the metal rods and have a pretty gnarly blood blister on my right index finger. I guess that’s the price I paid for getting her at half price.

Here’s the Black Widow in action.

Once the Black Widow is activated by her sensor she says the following phrases.

It is always so nice to see my prey come to be so willingly.

To get the animated Black Widow to talk you have to activate her. The sensor is located just below her belt. She is activated by sound and movement. The prop runs on 4 AA batteries which are included. She stands at 6′ tall and is pretty darn realistic looking when you catch her out of the corner of your eye. I’m a stickler for props and I want them to look as realistic as possible.

The prop originally retailed for $119 at Lowes and is still also available on Lowes.com.

I highly recommend the Black Widow although she isn’t perfect. The main complaint I have is that you can’t stick her in a dark room. When she’s activated her eyes light up revealing a lot of brackets attached to her face making her look like a robot. But if you keep the Widow in a room that is well lit you can’t really tell. I wish there was a way to turn off the brightness in her eyes, or at least turn it down some.

Another small complaint is the way her mouth works. She looks like a puppet when she speaks. Her mouth just drops up and down like Pinocchio when she speaks. I wish they had made the Widow’s face out of latex so it would look more realistic. But that is a minor complain and I am actually pretty happy with the prop. 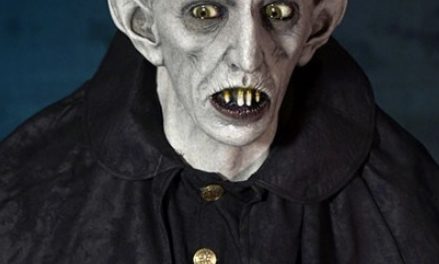 New For 2020: Nosferatu By Distortions Unlimited