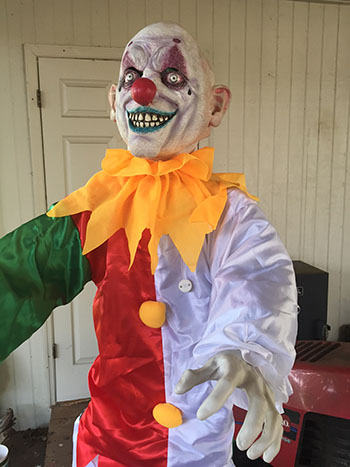 Last summer I was trying to find some cool animated props to bring my Clown Tent to life. I looked online and found some really cool props. The problem was I had a budget and had burned through most of it when I bought some of the new 2016 props from Spirit Halloween. I figured I could find some stuff on eBay and maybe get something cheap and fix it up. For $85 I came across this guy. 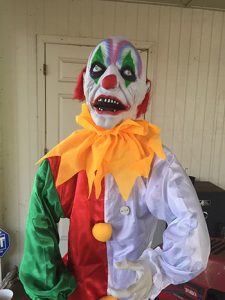 I’ll have to admit, he looked a lot cooler in the eBay ad but I only really needed the base and outfit. I had an old clown Halloween mask I had worn a few years ago lying around that I knew I could use to jazz up the cheap prop and make him into something respectable. The mask cost me $30 and since the clown was $85 I spent $115 total on this prop. I have a history of taking bad props and adding masks to make them into something special.

The clown does make noise and laugh but you have to press a button so I really only have him in an ensemble of other clowns.

The first thing I did was put some bubble wrap in the arms to make him look less flimsy. Bubble wrap is a great way to put some meat on a prop’s bones to make him more lifelike. You just wrap it around the arms until it’s the size you want. Also, I rolled up a shirt and put it across this shoulders to fill him out a little bit. The problem with some of these props are they are basically a stick figure when you put them together. You have to get creative if you want to flesh them out and make them more lifelike. 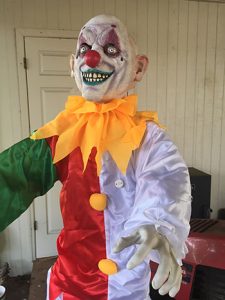 He’s a lot more terrifying than the cheap prop I ordered online. And when you put him in a tent with a bunch of other clowns he fits right in and adds to the terror you want your guests to feel when they come over for your Halloween party.

This is the clown tent I put together using the eBay clown prop as well as other clowns I have picked up over the years. I had a 5×5 tailgate tent sitting in my garage I hadn’t used in years. By putting some cheap kids bead sheets all around it followed by a light and some creepy clown music the clown tent was the best part of my party.