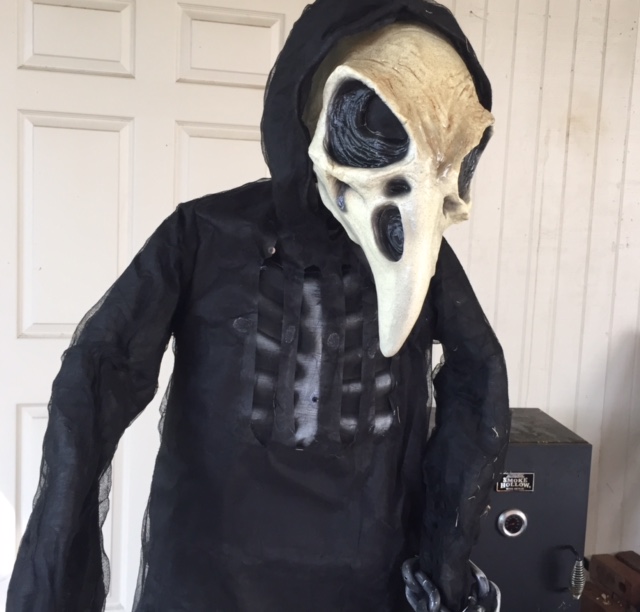 Last year I picked up a Home Accents Angel of Death from Home Depot on the day after Halloween. The manager at Home Depot was eager to get rid of the leftover Halloween items to make room for all the new Christmas stuff he had in his backroom. For fifteen bucks I got a bad Halloween prop but I knew I could do something with the frame and the robe on the the Angel of Death. All you need is an imagination and the means to buy a mask or a different costume to turn a pretty bad Halloween prop into something pretty creepy. It’s one of my favorite things to do each year in September and or October as we get closer to Halloween.

Here’s a video of the Angel of Death in action before I made him into something else.

The first thing I did was look online to find a mask to see what options I had and what I could turn the cheesy Angel of Death into. I could’ve just taken the wings off and he would’ve been a grim reaper, but that’s too easy. I was thinking about making the prop into a druid because I already have two other grim reaper props and wanted to do something completely different. I stumbled onto a crow skeleton mask on Amazon.com and bought it instantly because I knew it would go with what I wanted to do.

The mask fit right over the head of the Angel of Death but because the mask is so long it made the head droop a bit. I managed to get the head to stay upright by sticking a screw in between the base of the neck and under the chin. Now the head stays where it needs to and the prop comes across as pretty realistic. The only thing I don’t like is the skeleton that shows through the robe the prop is wearing. However, at night it won’t be as visible and not that big of a deal.

I actually just purchased three more masks and plan to change all of my grim reapers into crow druids. I think if I have them all gathered around a fire pit it will come across as very creepy to all my friends and family who come over for my epic Halloween party every year.

So if you are out shopping the day after Halloween and stumble across a cheesy prop don’t look at it for what it is. Spend twenty bucks or so and imagine the possibilities of what it could become next Halloween.