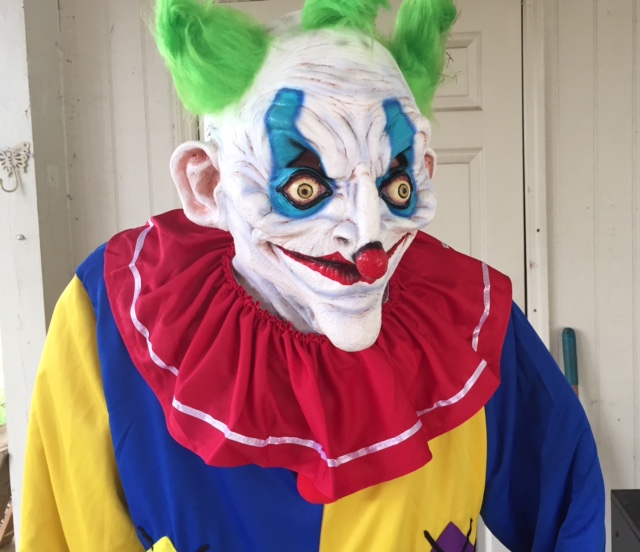 I love to go to big box retail stores the day after Halloween to look for deals. Last year I picked up the 72 in. Standing Zombie with Halloween Sound Effects at Home Depot the day after Halloween. The original retail price was $99.98. Home Depot had marked him down half price a few days leading up to Halloween but he still didn’t sell. On November 1 the manager told me they were marking Halloween items down even more to get ride of inventory since they had Christmas items that needed to come to the sales floor. Since the zombie was not in the original box the manager told me he’s take $20 for him. I shook his hand and told him, “Deal”.

Here’s the zombie in action.

I wasn’t really impressed with the Home Accents zombie but I knew I could make something pretty cool out of the frame. If you are going to make your own animated prop all you really need is a head and frame anyway. I decided in July I was going to change the zombie into a clown. I went looking for a costume and found a really good one for only $25 on Amazon.com that would fit over the clothes the zombie was wearing.

Next I went looking for a mask. Luckily there are thousands to choose from on Amazon.com. I settled for the Ghoulish Productions Old Clown Mask which I thought had a little personality but also was very, very creepy.

When I got the costume and the mask the prop only took a few minutes to put the prop together. I took apart the zombie at the legs to put the pants on. Then I pulled the shirt over his head and then made sure he was attached at the waist. I did put a safety pin on his right side so his shirt would stay attached to his pants. When the clown starts moving back and forth I noticed you could see the big pole that was holding together in the middle of his body.

Here’s a video of the clown in action after he was put together. I named him “Twitchy”. I think the name is kind of appropriate.

Twitchy isn’t the best animated I own but he is pretty cool. I like the way his body moves around and once I surround him with other clowns in my clown tent he won’t have to stand on his own and will blend into the crowd and compliment the other creepy clowns around him like Honky the Clown and others I’ve collected over the years.

If I were to buy something new comparable to Twitchy on SpiritHalloween.com or HalloweenExpress.com I would pay $150-200. But buy taking a bad prop that a Home Depot manager wanted to get rid of for $20 and adding and additional $70 for the mask and costume I wound up spending less than $100. If you have a bad Halloween prop and a great imagination you can make something really bad into something pretty creepy. That’s one of my favorite things about Halloween every year.