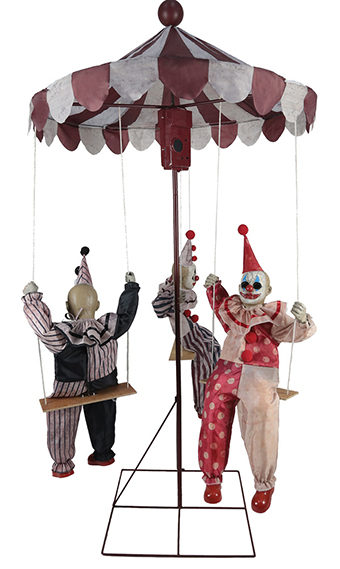 Just when you thought you’d see every kind of clown for Halloween Morris Costumes finds new ways to creep you out. For 2018 they are rolling out the Clown Go Round animated prop featuring three clown dolls on a merry go round. And this ain’t your normal merry go round. This one goes around very slow which is extremely creepy.

Check out the video below to see them in action.

According to Morris Costumes:

Three forgotten clown dolls from yesteryear are slowly riding a merry-go-round for eternity.

Sounds pretty creepy don’t it? The three clown dolls on the merry go round do look pretty old and Morris Costumes did a good job giving the making them look like they were found up in Grandma’s attic. In 2017 we saw some creepy doll props such as the Tricycle Doll that was insanely popular at Spirit Halloween last year. There was also a variation with an old doll on a swing that was very similar. Both were creepy and popular so it only makes sense to put a new twist on it and put them on a merry go round and have the dolls as clowns for 2018.

The best thing about the prop is the creepy circus music it plays. I love the slow and ominous circus music. Typically the music is played fast and it sounds upbeat and dun. But when they slow it down you get the feeling like something bad is about to go down and a clown is going to jump out at you and try to bite your arm.

Like most standard Halloween props you can plug the UL power adapter into any standard outlet and choose from Steady-On, Infra-Red Sensor or Step-Here Pad (which is included) to operate the animatronic. The Clown Merry Go Round weighs approximately twenty pounds and of course, there is assembly required.