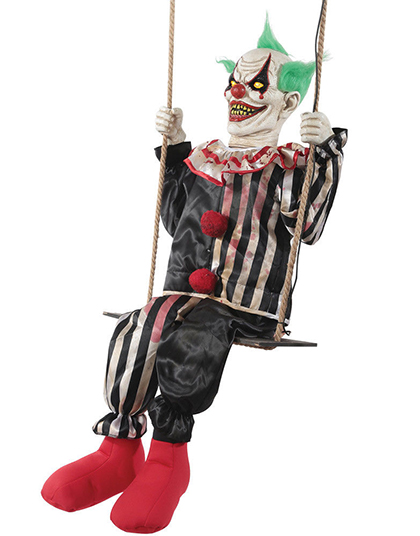 So what’s creepier than a clown? A clown on a swing that talks to you. Ever since “It” and Pennywise hit the silver screen last September clowns are the hot item for Halloween. It only makes sense that we see even more clown props hitting store shelves in 2018. Morris Costumes always has their fingers on the pulse of the Halloween consumer and ordered up even more clown terror with Swinging Chuckles.

Here’s a video of Swinging Chuckles in action from HauntCon in January.

Swinging Chuckles will likely cost $149 according to the manufacturer. Of course, this price can be higher or lower depending on the retailer. Some stores may sell it for $199 but you could find it on a website for $139. You just have to look around and find the best deal if the you thinking the clown on a swing is worth the price.

When activated Swinging Chuckles will swing and begin talking to you. His eyes will start glowing and his head will turn from side to side. The green spiked hair is pretty cool and different than most clown props you see on the market. If you look closely to Chuckles’ outfit he has blood splattered on his shirt and pants. I wonder how that got there? It’s probably best that I don’t find out.

I think if you have a lot of clown props Chuckles would make a great accent clown. An accent clown is usually a smaller clown you use to accent other clown props in your haunted house. On his own an accent clown like Chuckles isn’t that scary but when there are several different clowns surrounding another or several bigger clowns it makes the scene terrifying.

Halloween will be here before you know it. Better start getting ready now.