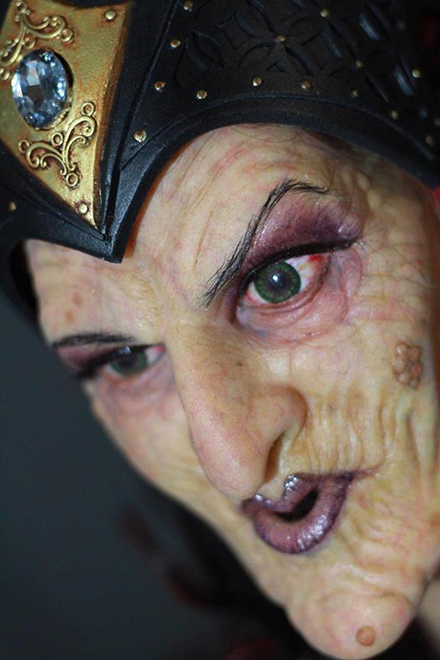 Bixby Studios may not be a household name to those outside the haunt industry but if they keep churning out high quality busts and props like the ones they debuted at Transworld in St. Louis they will be soon. Last month they unveiled their Sorceress and as you can see from the pictures below it’s awesome.

Bixby Studios offers two different variations of their Sorceress; the head can be purchased from their Signature Series Creature Heads and also as a full size static prop.

The Sorceress Signature Series Creature Head is a new take on one of their older pieces. They tweaked their existing witch bust and remade it into a new creepy Sorceress bust. The attention to detail on the bust is second to none. Everything is realistic from the eyes to the wrinkles on her face. Each head features a new paint scheme and will be fitted with steel square stock for easy mounting. This allows the head to mounted to a body or anything else you would like to put the head on. The cost for the Sorceress head is $750.

If you would prefer to own the Sorceress static prop it is available as well. The prop is approximately 5’6 and is made from a rigid body form re-enforced with a steel frame. To capture a lifelike look and feel Bixby Studios work with silicone for their skins. Everything is painted to order so each one is unique. They also can do custom paint and custom the costumes to accommodate whatever the buyers needs are. Bixby Studios can even tweak the skin color and make her green if you wanted. It would be easy to convert the Sorceress to a witch if you wanted. The cost of the Sorceress full size static prop is $2,500.

I think the Sorceress prop would look great in a window with a strobe light directly underneath. Imagine being a trick or treater as you walk up to a house with her in the window. No thanks…

Based out of Morgantown, West Virginia Bixby Studios likes to create characters with their own unique design so they have their own special attributes. The staff generally sits down together and will brainstorm ideas for different characters. Each member of Bixby Studios were influenced by the classic monsters and like to re-imagine them and come up with their own twist. Emphasis is always placed on creating a realistic presentation of their characters.

Bixby Studios creations can be ordered through them directly by phone or email. You can also contact them through their social media sites such as Facebook and Instagram.