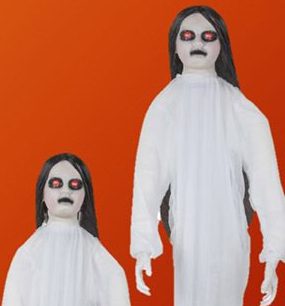 It’s barely April and we are starting to see things trickle out for Halloween 2018. That’s a good thing. Gemmy has started to reveal their new items for 2018 and their latest item is the animated Creepy Girl.

I’m not really sure what to think about this prop. The Creepy Girl is a pretty good idea and looks like the classic Halloween prop, Donna the Dead. I like the fact that she goes up and down. However, she looks very like she was made on the cheap and doesn’t look that good. But with the right lighting you might be able to make her look pretty creepy. If you have her in a dark room with a stobe light you might be able to spook your friends. I really hate the red lights in here eyes. I think the worst thing you can do to a prop is to put lightbulbs in a Halloween prop’s eyes. I think it makes it look so cheap but so many prop makers do it every year.

The animated Creepy Girl will likely be sold at big box retail chains like Big Lots or Target. Both retailers sold similar props last year that were fairly affordable. The retail price of the Creepy Girl isn’t known just yet but I would guess it will be in the $79 to $129 price range. More information will be available this summer when the prop goes on sale later in the year.

Gemmy is the grandfather of Halloween prop makers. They started in 1984 and have been making holiday items ever since. They really started turning out high quality Halloween props in the early 2000s but recently they’ve shifted more to more affordable props with lesser quality. With Gemmy producing cheaper props a lot of other companies have swooped in and started making higher quality Halloween props that you see in Spirit Halloween and Halloween Express. I wish Gemmy would get back to the days when they made really cool props like the Edwardian Butler and Freddy Krueger.