New For 2021: W.Raith From Spirit Halloween 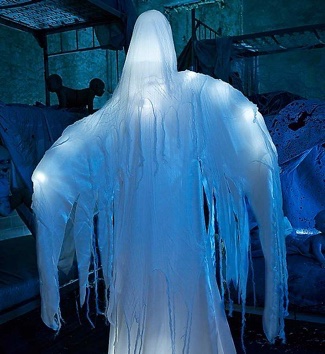 After dropping a ton of new Halloween props last week, Spirit Halloween quietly released one today that almost slipped under the radar. Today we get a new ghost animatronic from the Halloween super store that will likely be one of the more popular props this year.

If you haven’t met W. Raith, please let me introduce you.

When the Empress Hotel opened, it only took one night for the guests to come shrieking out of their rooms. W.Raith checked in for the weekend after a tough week to cut loose, but it looks like he had one too many cocktails during the grand opening reception because poor Mr. Raith ended up impaled on the hand-forged wrought iron gates below his suite’s balcony. Despite the opulence and splendor, the Empress hotel closed a few weeks later. You can hardly blame the guests, though, who wants to stay in a hotel where every night you are serenaded by the moans of a desperate specter trapped for eternity in a crumbling hotel.

This W.Raith animatronic features realistic floating motion and will look great as part of any haunted setting with the glowing white LEDs. With its six-foot stature and ghostly moans he’ll have no problem haunting your home and it’s guests this Halloween.

The W. Raith animatronic is pretty cool. When activated the ghost lights up as he moves his arms up and down. He also begins moaning and making some pretty eerie sounds that will likely creep out the guests at your Halloween party this year.

At $169.99 W. Raith is actually quite affordable and not as expensive as some other props I’ve seen this year. I like the idea of the prop but I want to see him up close before I decide whether or not I am going to pull the trigger. I haven’t seen a really good old fashioned ghost prop in a while. It’s very exciting.

Please check back soon! Lots of cool stuff is coming!