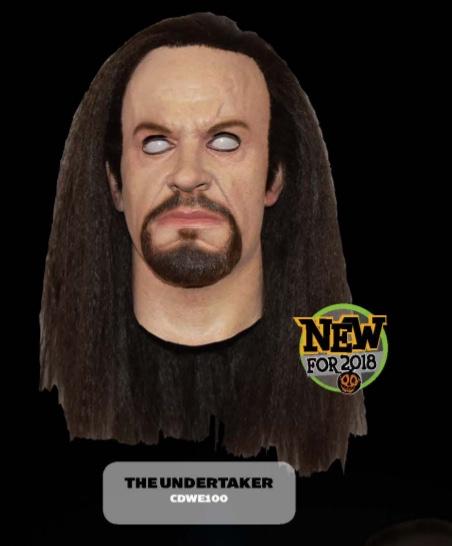 If you are a fan of the Undertaker and the WWE you are in for a treat this year. Trick or Treat Studios has produced an amazing mask of “The Dead Man” for Halloween 2018. As you can see in the picture below the Undertaker mask looks straight up like famous pro wrestler we’ve known and loved (and hated t times) for so many years.

The Undertaker has been digging holes and taking souls since he made his debut at The Survivor Series in 1991. Taker has been featured as one of the top guys in the WWF/WWE for over 25 years and is one of the most popular pro wrestlers of all time. He’s defeated a who’s who of WWE legends such as Hulk Hogan, Ric Flair, Brock Lesnar, Bret Hart, CM Punk, Randy Orton, Triple H and Shawn Michaels. There have been rumblings that Taker could wrestle one more match at Wrestlemania 34 before hanging up the hat and trench coat for good. Former WWE champ John Cena is thought to be the his next opponent in April should he come back for one more match at their biggest show of the year.

If you wanted to put this mask with an Undertaker costume you can have a pretty cool Halloween later this year. There are tons of different costumes on Amazon to choose from.

The new Undertaker mask isn’t available just yet on Trick or Treat Studio’s website. I was told by a company spokesperson that more information about their new products will be posted to their Facebook page in the coming weeks. Most of their new items will available for pre-order in March but our best bet is to keep on eye on their Facebook page. And just a heads up most of their popular items often sell out so you may need to get your order in a few months early to ensure you get your mask for Halloween this year.

Trick or Treat Studios has a pretty cool “Stone Cold” Steve Austin mask coming out this year too. Even though he is no longer competing Austin remains one of the most popular WWE wrestlers of all time. Like their Undertaker mask, the Steve Austin mask looks amazingly realistic and eerily just like “The Texas Rattlesnake”.

You can also expect to see a new Andre the Giant, Ric Flair and The Rock mask too. Both are listed on their 2018 catalog but only show the prototypes. I would expect they will be releasing more info in the coming months.

In addition to Ric Flair, The Rock, Steve Austin and Undertaker Trick or Treat Studios has some pretty cool masks of the following legendary WWE Superstars:

If you are a fan of the WWE you won’t find better masks of your favorite WWE Superstars. The attention to detail at Trick or Treat Studios is second to none. Even if you aren’t a fan of professional wrestling you can’t deny that their masks of the WWE legends are fantastic.