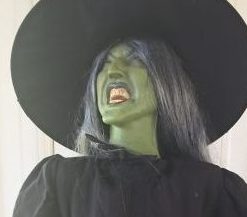 I grew up watching the Wizard of Oz and was along with a lot of other people in the world was scared to death of the Wicked Witch of the West. I had seen that she was made into an animated Halloween prop a few years ago and wanted to add her to my collection but never got around to doing it. I saw her in a store for $200 two years ago and decided that was too expensive. Last year though, I was in luck as I found the Wicked Witch of the West for $30 at a Bargain Hunt in Nashville, TN. Bargain Hunt is a local discount store that buys deeply discounted merchandise from different stores when it goes out of season and then holds onto it for a year then sells it at a discount price.

Here’s my find once she was assembled.

The Wicked Witch of the West has four sayings that she will repeat when someone triggers her and sets off the sensor.

“Who killed my sister? Who killed the witch of the East? Was it you?”

“I’ll get you my pretty. And your little dog too!”

“When I gain those ruby slippers my power will be the greatest in Oz.”

“Who would’ve thought a good little girl like you could destroy my beautiful wickedness.”

Of course the Wicked Witch of the West comes with her trusty broom that she can use to fly away or turn you into a toad.

There are other variations of the Wicked Witch of the West animatronic out there but for $30 I’m happy with what I have. She’s not the favorite witch animatronic in my collection but she’s one that a lot of the guests at my Halloween flock to since she is one of the most recognizable. Last year I put her up on a small hill in the side of the yard with lights underneath her to really accent who she was and I noticed that neighbors I rarely saw walked over to check her out.

I’ve noticed that the Wicked Witch of the West prop isn’t available at Amazon, Spirit Halloween, Halloween Express or eBay. I found some older listings on eBay for $140-200 where the prop did sell over the years. Considering how hard the prop is to find and with the price I paid I’m very happy she is in my collection. The Wicked Witch of the West will be a mainstay at my Halloween party each year and I look forward to having her in my yard to spook anyone who dares to come close to her.