Now that Halloween 2017 has come and gone it’s time to start thinking about what to do for next year. We won’t see any of the props that will be available at Spirit Halloween and Halloween Express until the trade shows start up early next year. 2017 was a great year for Halloween animatronics with the 7′ Evil Clown and Black Widow and you have to think that there will be more great things available next year.

After thinking it over here are ten new animatronics we’d like to see in 2018 that are actually possible.

No one will admit it now, but everyone loved Little Shop of Horrors when it came out back in 1986. Now the film seems a bit dated when you watch it. However, we are all in luck as a remake is in the works and it’s rumored to be coming out in 2018. What better way to celebrate the new film than to create an animated prop of Audrey II, the main character? It would be fairly easy to have a pot as the base and then have a big plant that opens it’s mouth as it tried to eat you when it passes by. I’ll keep my fingers crossed. 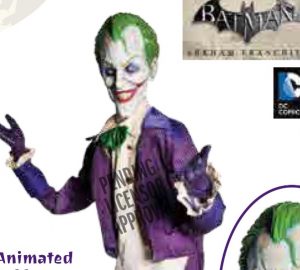 Morbid Enterprises actually made the prop last year but retailers didn’t express an interest in carrying it for Halloween 2017. I’m hoping that they change their mind. The Joker is one of the coolest animatronics I’ve seen in a while and I can’t believe it didn’t have enough interest. Maybe after the new Justice League movie comes out the people who makes the decisions will decide to pull the trigger on The Clown Prince of Crime.

For the life of me I don’t see how anyone hasn’t already made a Stay Puft Marshmallow Man prop. I understand if they can’t do it because he’s so large but I think at least Stay Puft could be an inflatable. Someone at Columbia Pictures could make a fortune in licensing fees if someone like Morbid or Gemmy could figure out a way to make a big prop of the Marshmallow Man for Halloween. They made a Slimer prop now they need to make one for Stay Puft.

There have been a few different Michael Myers props over the years. Trick or Treat Studios made one recently.

But the most popular Michael Myers animatronic came out in 2010 when Rob Zombie rebooted the Halloween franchise.

Now Michael is returning in 2018 for another film. This one will be a direct sequel to the original set 40 years later. Jamie Lee Curtis returns as well. Since we are getting another Halloween film it only makes sense that they make a new animated prop of Michael, right? We’ll see…

After the new version of Spider-Man did so well at the box office there is now rumors of a Venom movie coming out in 2018. Venom has a ton of fans so it only makes sense for Sony to strike while the iron is hot and make a film for the popular Spidey villain. An animatronic Venom would no doubt be a hit and make someone a lot of money. I don’t think it will happen but, man, would it be cool.

In 2010 Spirit Halloween introduced a Freddy Krueger animated prop to coincide with the 2010 Nightmare on Elm Street movie that starred Jackie Earle Haley. The prop can be found on eBay for around $300 even though it looks nothing like the original Freddie that so many of us grew up with.

The reboot was a flop and Freddie Krueger fans were pretty upset that New Line didn’t do the original films justice. Now there are rumblings that another remake is in the works for 2018 and if that’s true hopefully Gemmy will do the right thing and make a genuine old school Freddy animatronic featuring Robert Englund’s version. The demand will be there if they want to give it the greenlight.

Like Nightmare on Elm Street the classic “The Wolfman” is also supposed to relaunch in 2018. Universal is trying to establish their Dark Universe after launching the crappy Mummy reboot earlier this year. Maybe they’ll get it right with the Wolfman and we can have a badass werewolf prop straight from the new film. There are lots of really cool werewolf props out there already but an official Universal Wolfman would be pretty cool.

Speaking of sequels and reboots a new Predator movie is on it’s way for 2018. The film is supposed to follow the original sequel in 1990, and not the last one in 2010. The Predator has a cult following and 20th Century Fox could make a fortune in licensing if they decided to let someone make an affordable Predator animated prop. The Horror Dome produced a really nice Predator statue but at $9,000 it’s not something you are going to see at Halloween Express next year. There is a lot of inexpensive Predator merchandise out there and I think if they were going to make a Predator animatronic someone would’ve made it by now.

After the success of The Conjuring 2 New Line has greenlit a movie about Valak, the Nun who was the main protagonist in the sequel. What made the Nun so creepy was that we didn’t see a lot of her. And when we did see her, she was terrifying. I’d love to see a prop of Valak made to coincide with the new film, as would lots of other fans of the film who would gladly give you their 200 bucks for it. The prop would be easy to make as you would have to come up with a creepy white face and then put a nun’s costume around it. Sounds like easy money to me…

This one is a no-brainer. “It” was the breakout hit of 2017 and I’m surprised that Morbid or other top animatronic makers didn’t have a Pennywise animated prop ready to roll out for Halloween. Whoever can get the license from Stephen King will have a license to print money. There is an older Pennywise prop based on the 80s TV movie but it’s not that impressive

Rubie’s produced a really nice Pennywise mask that came out in the fall of 2017 so I would imagine someone could work out a deal to produce a lifesize Pennywise animatronic.