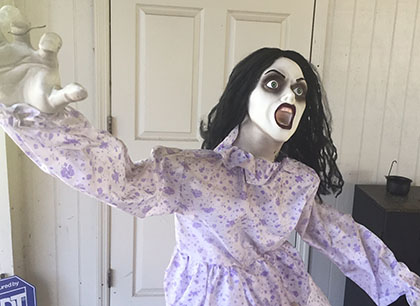 Last year when I was looking for some deals on Halloween animatronics I came across the Animated Gothic Girl on eBay for $130. I was interested in the prop but thought that $130 was a little too much for the creepy animatronic. I reached out to the seller, Sarcazmos Fun House and asked them if they would reduce the price. I also had interest in another one of their props and they agreed to reduce the Animated Gothic Girl to $85 if I bought the other prop as well. I couldn’t pass up the opportunity to pick up a new animated prop for my collection, especially when she was different than any other I already had.

The Gothic Girl isn’t a great on her own but when you put her in a scene or haunt as a secondary character she works really well. Last year I put a blacklight in my storage shed and had a infant sitting right in front of a TV showing nothing but static. It was pretty creepy. I placed the Gothic Girl over to the side where you couldn’t see her unless you were in the shed. The prop worked great and complimented the infant staring at the TV.

You don’t have to spend a fortune on props as long as you know how to use the ones you have correctly. You can’t stick the Animated Gothic Girl out in the yard and expect her to creep out your friends and family. This prop has to be worked into a haunt. You could even work the girl into a zombie theme if you wanted to. She’s kind of on the verge of being a zombie/possessed girl who could work in either scenario. I like using her in something out of the Poltergeist but it’s up to you and your imagination what you decide to do.

The Animated Gothic Girl doesn’t really say anything. When she’s activated she just moans and sways from side to side and her arms move. She is 64′ inches tall and doesn’t weigh very much. The prop doesn’t have any legs. It’s basically a prop that you put onto some poles and her white dress covers it up so you can’t see she doesn’t have legs.

I don’t recommend paying over $120 for the Animated Gothic Girl. She’s pretty cool but rather generic. The prop works well if you don’t make her the centerpiece of your haunt. She’s mean to be a complimentary piece that should be used in the background if possible.